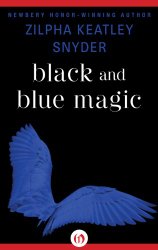 Well, my co-worker opened up the floodgates when he decided to order Three Investigators books via Interlibrary Loan. That got me thinking about the other books I loved in childhood but that are no longer in print.

Many other books by Zilpha Keatley Snyder are still in print, so I don’t know why Black and Blue Magic is not among them. It’s the one I checked out from the library over and over again and dearly loved.

And it was just as good as I remembered it! (A lot shorter than I remembered it, but just as good!) Harry Houdini Marco is clumsy as can be, always tripping or running into things. His mother says he’s just still growing, but all he knows is that he’s clumsy. And Harry believes that if his father were still alive, Harry would be a disappointment to him. Harry’s father was a skilled magician, and wanted Harry to be the same, which explains the name he was given. He even brought him to the Great Swami and got a prophecy that Harry’s “magic will be of a very special kind.” But Harry has tried doing magic tricks, and he’s just not coordinated enough.

But then one day Harry sees a little man who’s clumsy lose his big suitcase on the bus. Harry gets off the bus and takes it to him. The man’s a salesman, so Harry recommends his mother’s boarding house. Before the man leaves, he gives Harry a magical reward. It’s an ointment, and when Harry puts a drop on each shoulder, he sprouts wings!

Harry has to learn how to use the wings safely and unobtrusively. He’s accidentally seen by a few people, and it’s quite amusing the conclusions those people draw.

This book is wonderful because there’s magic and adventure combined with character growth and personal problems that Harry is able to solve.

It’s a delightful book about a good-hearted kid who finds out that special magic might make him a little black and blue. And it definitely stands the test of time.

Find this review on Sonderbooks at: www.sonderbooks.com/Childrens_Fiction/black_and_blue_magic.html