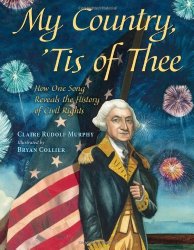 My Country, ‘Tis of Thee

How One Song Reveals the History of Civil Rights

Did you know that the patriotic song “My Country, ‘Tis of Thee” has been used as a protest song down through all the years America has been a country?

This picture book – with evocative artwork by Bryan Collier – traces the history of the song, with each double-page spread giving us another verse that was sung to the tune.

The song as we know it wasn’t written until 1831. But before that, the tune was sung in England and its colonies as “God Save the King.” Already the song was used in protest, as Scottish followers of Bonnie Prince Charlie made a verse for him. In the Colonies, preacher George Whitfield wrote new verses to express that all men are equal. As the Revolution got underway, new verses were written declaring freedom.

The author goes through history, presenting new verses that were sung at different time periods, nearly always supporting a cause or another. The Abolitionists had a version; the Confederacy had a version; women’s suffragists sang for their cause, and even migrant workers.

The book culminates in Martin Luther King Jr’s quoting the song in his “I have a dream” speech, and then Aretha Franklin singing at Barack Obama’s inauguration.

I had no idea this song can be and has been such a feisty one! I especially like the way the author ends the book:

Now it’s your turn. Write a new verse for a cause you believe in. Help freedom ring.

Find this review on Sonderbooks at: www.sonderbooks.com/Childrens_Nonfiction/my_country_tis_of_thee.html