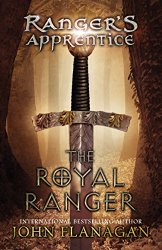 I listened to the first two and a half books of The Ranger’s Apprentice series, but lost interest in the middle of book three. I have to say that I think John Flanagan has improved as a writer since the beginning of the series.

I wasn’t lost picking up the series with Book 12, though if I were planning to go back and read the books I’d missed, I’d know how some things turned out. I must admit I did like seeing the “futures” of so many of the characters I met in the first two books. In fact, at times I was annoyed in the early books when he seemed to be dwelling on minor characters. – It turns out they were quite important, after all.

But this book is nicely self-contained and tells a good story. The princess Maddie is acting like a spoiled teenager. So her parents ask Will to take her on as an apprentice – the first ever female Ranger’s apprentice.

Will’s got some issues of his own, becoming obsessed with revenge. I like the way this book mirrored, in some ways, the first book, where Will himself was the apprentice. Will and Maddie take on a challenge that threatens to be more than they can handle, and the title doesn’t give away the ending this time!

And there was no magic in this book, evil or otherwise. In the early books, there was a sinister sorcerer they had to fight. I found it interesting that in this book it’s more ordinary (but still powerful) evil they are up against.

For adventure and the excitement of a small person effectively and cleverly fighting bad guys and helping the weak, this series fills the bill.

Find this review on Sonderbooks at: www.sonderbooks.com/Childrens_Fiction/royal_ranger.html