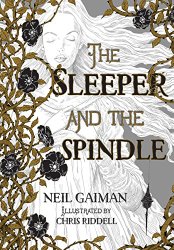 The Sleeper and the Spindle

This story is beautiful and eerie at the same time. It feels familiar, but twists things in unexpected ways.

The book starts out with some dwarves going under some mountains to get finest silk for their queen, who is soon to be married. On the other side of the mountains, they find an enchanted sleep spreading. It is spreading out from a castle with a princess who was cursed, as in the traditional tale, and has been sleeping for years. But now it’s not only the servants in the castle who are sleeping as well. The sleep is spreading to all the surrounding villages.

The tale first starts going in unexpected directions when the queen decides to go break the spell.

“I am afraid,” said the queen, “that there will be no wedding tomorrow.”

She called for a map of the kingdom, identified the villages closest to the mountains, sent messengers to tell the inhabitants to evacuate to the coast or risk royal displeasure.

She called for her first minister and informed him that he would be responsible for the kingdom in her absence, and that he should do his best neither to lose it nor to break it.

She called for her fiancé and told him not to take on so, and that they would still be married, even if he was but a prince and she a queen, and she chucked him beneath his pretty chin and kissed him until he smiled.

She called for her mail shirt.

She called for her sword.

She called for her provisions, and for her horse, and then she rode out of the palace, toward the east.

Neil Gaiman knows the language of fairy tales. But he also knows how to surprise the reader.

The illustrations are also wonderful. Looking at them a second time, I’m finding new details everywhere. They are black and white with gold highlights, and extremely detailed.

There’s a place where hundreds of sleeping people, completely covered with cobwebs, start sleepwalking toward the queen. The illustrations here are incredibly sinister.

The story doesn’t take long to read, and every spread has illustrations, but this is not a picture book, nor is it written for preschoolers.

Here’s the scene where villagers tell the dwarves about the plague of sleep:

“. . . And brave men,” continued the pot-girl. “Aye, and brave women too, they say, have attempted to travel to the Forest of Acaire, to the castle at its heart, to wake the princess, and, in waking her, to wake all the sleepers, but each and every one of those heroes ended their lives lost in the forest, murdered by bandits, or impaled upon the thorns of the rosebushes that encircle the castle –“

“Wake her how?” asked the middle-sized dwarf, hand still clutching his rock, for he thought in essentials.

“The usual method,” said the pot-girl, and she blushed. “Or so the tales have it.”

“Right,” said the tallest dwarf. “So, bowl of cold water poured on the face and a cry of ‘Wakey! Wakey!’?”

“A kiss,” said the sot. “But nobody has ever got that close. They’ve been trying for sixty years or more. They say the witch –“

“Whatever she is,” said the sot. “She’s still there. That’s what they say. If you get that close. If you make it through the roses, she’ll be waiting for you. She’s old as the hills, evil as a snake, all malevolence and magic and death.”

Find this review on Sonderbooks at: www.sonderbooks.com/Childrens_Fiction/sleeper_and_the_spindle.html