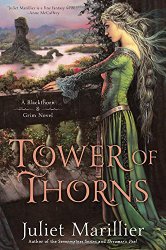 This is the second book about Blackthorn & Grim, and yes, you should read the books in order.

In Tower of Thorns, like the first book, there’s a mysterious enchantment that Blackthorn and Grim need to break. Along the way, we find out more about both of their painful pasts.

This series is set in ancient Ireland. Monks are around, but also Wee Folk and others of the fey. Blackthorn is a wise woman. She wants nothing else than to bring vengeance and justice to the chieftain who had her husband and baby killed. But she is under conditions given by the fey who set her free from prison to not seek vengeance for seven years — and to help anyone who asks her.

In this volume, there’s a lady who lives near a tower that has cast a blight on all the land around it. But she’s not telling Blackthorn the full story.

And while Blackthorn is working on that curse, she sees an old friend, whom she’d thought was dead. He says that he will be able to bring the evil chieftain to justice if she goes with him. But there’s no way she’s going to take Grim into danger, so the only answer is to lie to him. Or so she decides.

In this installment, we get more insight into what happened in Grim’s past. We see, though Blackthorn doesn’t, how strong the bond has grown between them.

Juliet Marillier’s writing is magical. I read this on my flight across the country, and had to continue until I’d finished.

Blackthorn and Grim are described as people dealing with Post Traumatic Stress Syndrome. They have their own curses of flashbacks and have trouble trusting anyone, and certainly don’t claim to faith in God. But the reader cannot help loving them as they struggle on and try to do good in the world, in spite of themselves. The description of their journey is pitch perfect and brings the reader along with them. I can’t wait for the next installment! This is a wonderful series, even if I wasn’t quite as enthralled as I was with the first volume. That was mainly because most of the people they were dealing with weren’t nearly as good-hearted as those in the first book. But Blackthorn and Grim themselves are people I can’t hear enough about.

Find this review on Sonderbooks at: www.sonderbooks.com/Fiction/tower_of_thorns.html

Source: This review is based on my own copy, purchased (and preordered) via Amazon.com.