Today was the third day of 2016 ALA Midwinter Meeting. Today my plan was again to make it to an 8:30 am session.

I left my hotel room and got into a crowded elevator — and author Mac Barnett entered the elevator next to me!

I’m a year behind — but Sam and Dave Dig a Hole is one of my 2015 Sonderbooks Stand-outs.

When we got off the elevator, so we weren’t surrounded by others, I said, “What do you do when you’re in an elevator next to a celebrity?”

I said more things, but they came out rather idiotic (I thought), and I left the hotel to get on the bus to go to the convention center. He wished me a good day at the conference.

Then I went to a session on Teens and Social Media presented by Denise Agosto, whom I think I had a class with when I was an online student at Drexel University. (I know I read several of her papers.)

The session was very informative. She’d done extensive studies and based this information on what she’d found.

First, she cleared up some myths about teens and social media. Click through to the links for her hand-outs on the topic.

Teens are far more savvy about internet privacy than adults tend to think they are. She did find that schools that allow social media use — and model good practices via the teachers and staff — have much more savvy teens.

Social media is opening up new ways of collaborating and creating, and teens are getting in on that.

She also did some studies on Teen Attitudes toward Privacy and Safety.

Youth Attitudes Toward Privacy:
1) They believe there’s no such thing as true privacy online.
It’s a perspective change: They tend to assume anything they say online is as public as speaking out loud in an auditorium.

2) Discomfort with unintended audiences accessing/capturing personal data.
As an example, one boy was horrified to discover that if you googled his name old pictures of him from a closed account of when he was in middle school would come up.

3) Tension between the desire to share and withhold information.
They want a following but still want privacy.

Youth Attitudes Toward Safety:
1) Generally more concerned about potential loss of online privacy than about potential safety issues.
A feeling of: Everyone else is risky, but I’m safe.

2) Online safety is a learning process that takes time to develop and also develops with increased age, maturity, and experience.

3) Teens tend to believe that other generations are less knowledgeable than they are about online safety.
They roll their eyes at some things their parents do, but are also willing to act as media mentors for middle school and younger students.

After talking about attitudes, we talked about best practices.

1) Be social media role models. (Where schools allow social media — for students and staff — this is more effective.)

2) Provide social media education.
Doesn’t have to be in-house. A college or church may be willing to provide a speaker.
Kids are tired of videos, though. Provide hands-on time in a computer lab where you actually look at privacy settings and what the different settings mean and allow them to set them. Tell them their options.
Let people tell their own stories. Discussion is worth far more than a video.
Avoid scare tactics — frame lessons in positive terms.
Talk about it in terms of risks vs benefits.

After that program finished, I introduced myself to Dr. Agosto as a former Drexel student. Then I went into the exhibits and found Sarah Brannen doing an author signing.

Sarah is the author of Madame Martine, which was my #1 Sonderbooks Stand-out for Picture Books I read in 2015. She also wrote a wonderful sequel, Madame Martine Breaks the Rules. Lucky Sarah had to go to Paris to research the books! She said she saw many old ladies walking dogs on the grounds of the Eiffel Tower.

Living near Washington, D. C., as I do, I took the message of Madame Martine to heart and have made a goal in 2016 of doing at least one adventurous outing each month. (Of course, for January, the outing is going to ALA Midwinter Meeting!)

After purchasing two copies of Madame Martine and getting them signed to my little nieces, I went to a Houghton Mifflin Harcourt Book Buzz. I have to say that Book Buzz sessions only make me want to read *more* books. I got a list of books I will watch for (adult books this time), but I did manage to stay away from their booth after the talk and not grab a copy of each book they had mentioned.

After eating lunch, I went to hear Stephon Alexander, the author of The Jazz of Physics. 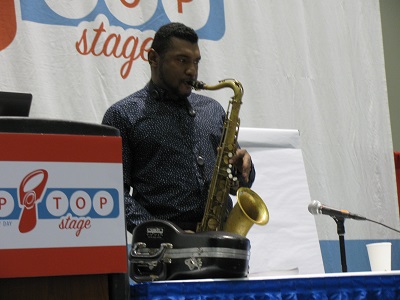 He was born in Trinidad and Tobago and grew up in the Bronx. He is now a full professor of physics at Brown University.

In many ways, his book is about inclusivity. His musical life was in the closet with his physics colleagues, and he didn’t talk about physics with his musician friends.

Only 5% of American professors of physics are female. But only 2% are African-American or Latino. But the great physicists of the twentieth century were children of immigrants. They were different, too.

His book is also about narrative. He was taught physics through storytelling.

And his book concretely addresses the intersection of music and physics. His high school physics teacher was also his music teacher.

His family expected him to be a musician. But he found he was more interested in how music works.

The book is also about analogies and metaphors. Mathematics itself is an analogy. Music notes are a metaphor.

How to improvise is an art, science and craft.

The book is about how the universe is structured. There was vibrational energy in the early universe, and of course vibration is at the heart of music.

He did play his saxophone for us to illustrate some of the principles. 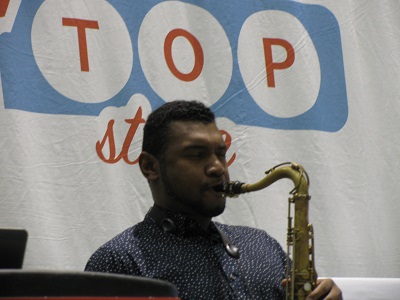 He talked about the pentatonic scale and its underlying symmetry.

He has reframed the Uncertainty Principle as the Improvisation Principle.

In questions, someone asked about the Imposter Syndrome he’d mentioned. I liked what he said that bringing his music to his physics helps him feel better about making his own contribution. He also said that we’re all Frauds! The great physicists of the past were outsiders, too.

He did say that science needs to be more inclusive. It’s time to make use of our natural human resources.

And he echoed something I’d heard in other places this weekend — that it’s about PLAY!

When he got his first saxophone, he saw it as a toy, unlike the piano, which he’d been told to practice. We learn when we’re playful and not afraid to make mistakes.

After the talk, I was able to get a signed Advance Reader Copy of his book. And, yes, I mentioned my prime factorization sweater and other mathematical knitting, and he told me to come to his signing in the booth later (He was out of time on the stage) so he could tell me more about physics and knitting.

Next it was time to mail my books home! I have to check out of my hotel room tomorrow, and I knew I needed the use of my rolling carry-on to get the books to a place where I could ship them.

Then, of course, I went back to talk to Stephon Alexander more. And this time, I had my prime factorization scarf with me. And the Outliers Scarf, for which I’m sewing in the ends.

He liked them so much, he called up his girlfriend, who was elsewhere in the exhibits, and asked her to come see them, because she’s an artist, and he thought she’d like to see them. 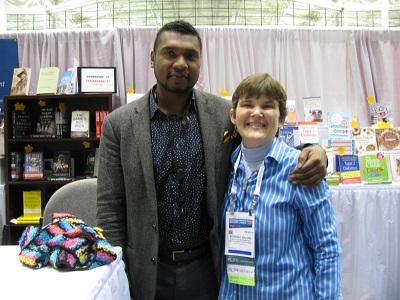 He did, also, tell me a story about a great physicist who said that grandmothers knitting know more than beginning physics students.

And I’m afraid the whole delightful encounter increased my impression that book people, in general, don’t necessarily appreciate the beauty in math the way people in math or science fields do. I still say they are NOT mutually exclusive! Anyway, I loved what Stephon Alexander had to say about the intersection of music and physics, and I’m looking forward to reading his book!

And to cap the day off, when I got back to my hotel, I saw an elevator with its door about to close and rushed to catch it, as the man inside kept the door from closing. When I stepped inside — It was Mac Barnett!

I apologized for my incoherence in the morning and this time managed to introduce myself. He did remember me because of my reviews, and the whole encounter made me much happier and far less mortified with myself than the one that started the day!

Of course the highlight of the whole conference happens tomorrow morning, when the Newbery and Caldecott and many other award winners are all announced! I will be there cheering, and tweeting the results!