The one knitted object in my Sonderknitting Mathematical Knitting Gallery which I haven’t explained is the Coded Affirmations Scarf.

I knitted the scarf with a small ball of leftover yarn before I knitted Alyssa’s Coded Blessing Blanket, but after it had occurred to me that you could use mathematical bases to make coded messages, as in this Base Six Code Coloring Sheet. With knitting, instead of colors, you use a different two-stitch stitch pattern for the code.

I’m pretty sure I used a similar code for the Affirmations Scarf as I did for the Blessing Blanket later. The patterns would have involved knit and purl stitches, cables to the front or back, and yarn overs with decreases. But to be honest, the scarf is much harder to read because it’s not as clear where the letters begin and end. (It was nice in the blanket that I had a built-in grid to use.)

Anyway, the idea wasn’t to be able to decipher it. The idea was that I would know what the scarf said.

What does the scarf say? My name — my full name, my nickname — and words that I believe describe me. (Along the lines of “Loved,” “Joyful” — you get the idea.)

And the effect is just a seemingly random lacy pattern.

This was my first experiment. And looking at it now, years later — well, I still haven’t been able to decipher it. (I’m hoping I wrote down the code somewhere!)

But the idea — to knit meaning into a scarf with a coded message — was a complete success.

And I still say you could do this with colors on the edge of a picture or anywhere else you want a secret meaning hidden in a pretty pattern. 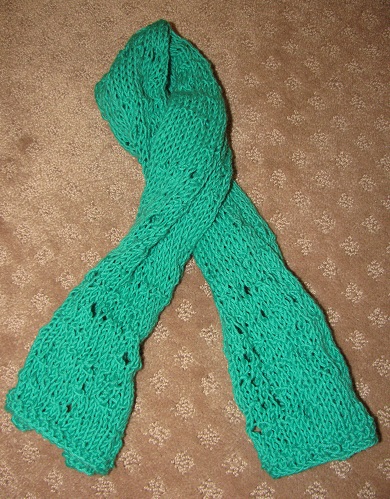