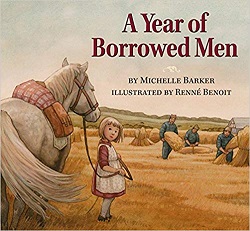 A Year of Borrowed Men

Here’s a picture book for older readers that’s based on a true story from wartime Germany. The author used a story her mother told her.

I was seven when the French prisoners of war arrived at our house.

It was 1944. Mummy told us the government had sent them because all our men were gone to war, and someone needed to keep the farms running. She said we were just borrowing the French men. When the war was over, we would give them back.

The French men do work on the farm. The family is supposed to treat them like prisoners. When they slip up one cold night and let the borrowed men eat with the family, the next day the mother is taken in for questioning and warned that if there is any repeat, she will go to prison.

So they have to keep their distance – but this story is how friendship builds between them, anyway.

And it’s lovely. I like the scenes where they speak to each other in their own languages. Gerda (the narrator) shows them her Christmas doll. They learn that eine Puppe in German is very close to une poupée in French.

Old photographs at the back of the book emphasize the truth of this story.

It’s always inspiring when those who are told to be enemies make friends.

Find this review on Sonderbooks at: www.sonderbooks.com/Picture_Books/year_of_borrowed_men.html