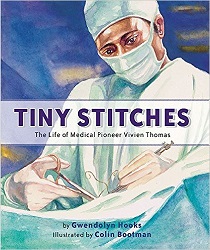 Tiny Stitches is the story of Vivien Thomas, the African-American medical researcher who developed the surgical procedure that saved the life of blue babies during the days of segregation and despite overwhelming prejudice.

Vivien always wanted to be a doctor. He saved money for medical school even as a child working with his father as a carpenter. But they lost all their savings in the Great Depression.

It wasn’t through going to medical school that Vivien got his opportunity. He interviewed for a job with medical researcher Dr. Alfred Blalock, and impressed him with his knowledge and intelligent questions. He got a job assisting Dr. Blalock, who gave him more and more research of his own.

Vivien was happy working as a researcher, until he learned that his official job description was janitor. White men with the same duties and skills as Vivien were called research technicians and earned more money. Vivien was insulted. He was not a janitor. He told Dr. Blalock that he would not continue working unless he was paid the same as the other technicians. A few days later, Vivien noticed his paycheck was much better. He now earned about the same as the white technicians.

In 1941, Dr. Blalock became Chief of Surgery at Johns Hopkins Hospital in Baltimore, Maryland. He took Vivien Thomas with him, where Vivien faced even more discrimination.

In 1943, Dr. Helen Taussig approached them with the problem of blue babies – babies born with a heart defect so that their blood didn’t get enough oxygen, and they died. Dr. Blalock assigned Vivien to research a method for operating on the babies.

Vivien had to develop new needles small enough to use on babies, and he tried the procedure out on animals. Dr. Blalock assisted Vivien only once during his experiments.

On November 29, 1944, Dr. Blalock tried the procedure Vivien had developed on a blue baby patient named Eileen. Dr. Blalock asked Vivien to stand on a stool behind him and guide him through the operation.

After that operation and others (also assisted by Vivien) were successful, Dr. Blalock and Dr. Taussig were highly acclaimed.

The last double-page spread has a picture of Vivien in full academic regalia up on stage.

Vivien Thomas was not publicly acknowledged for his brilliant research and surgical talents until more than twenty-six years after the first blue baby operation. On February 27, 1971, the Old Hands Club, a group of doctors who had trained under Vivien, presented a formal portrait of him to Johns Hopkins Hospital. It is displayed across from Dr. Blalock’s portrait. In 1976, Johns Hopkins University awarded Vivien an honorary doctorate degree and appointed him to the faculty as Instructor of Surgery.

Although he never had the chance to attend medical school, Vivien’s research pioneered open-heart surgery on children. Today about forty thousand children are born each year with heart problems. Because of Vivien Thomas, these children now have a chance to live full and healthy lives.

This book isn’t flashy. The prose tells the story without frills. The pictures show a doctor at work. There’s nothing surprising or startling here.

But the story tells about a remarkable man who did outstanding work and saved lives – even without recognition.

Find this review on Sonderbooks at: www.sonderbooks.com/Childrens_Nonfiction/tiny_stitches.html