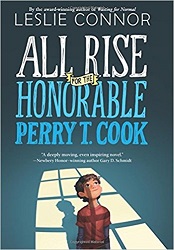 All Rise for the Honorable Perry T. Cook

Perry Cook has grown up in prison at Blue River Co-ed Correctional Facility in Surprise, Nebraska. His mother is a resident, and Perry was born shortly after she came to the minimum security prison twelve years ago. Warden Daugherty is officially Perry’s foster parent, and Perry has his own room next to the warden’s office.

Perry goes to school in Butler County, and as the book starts, he’s getting ready to start middle school. He met his best friend, Zoey Samuels, when she moved there in the middle of fourth grade. Zoey moved to the area because of her stepdad’s job. The description of the stepdad rang true – always trying too hard with her and coming across like a big fake.

But then Zoey’s stepdad Tom VanLeer finds out about Perry. And Tom is the new district attorney. A boy living at a prison? He’s outraged. Without telling Zoey, he decides to Do the Right Thing and take Perry into his own home. What’s more, Warden Daugherty gets suspended, and Perry’s mother’s parole hearing gets postponed.

Tom also tries too hard with Perry. Tom thinks he’s saving him from a horrible life growing up in prison. Perry only knows that he’s been forced to leave his mom and his home.

Then their English teacher assigns the students a project to find out why their family came to Butler County. Perry decides to learn the stories of his Blue River family, including his mother’s full story.

I didn’t expect to even like this book much, but I loved it. Maybe it stretches plausibility just a tad, and things do tie up pretty neatly in the end – but the characters are so well-drawn, they’re a delight to spend time with, especially including Perry’s family at Blue River.

And while the overall situation of a boy growing up in prison may be a little hard to believe – if you accept the premise, it’s easy to believe this is how things would work out, including the residents and their quirky personalities, the comments Perry gets from kids at school, and the reaction of the self-righteous district attorney.

Most of the book is told from Perry’s perspective, with chapters here and there from his mother’s perspective. Personally, I think the book could do without his mother’s chapters – but they don’t harm the book. I just don’t think they’re necessarily needed. You can figure out how she feels about all of this.

Perry’s a great person to spend time with. As he learns the stories of the residents, the reader gets a chance to feel some empathy as well and see how easily lives can go off-course. But the big question: Can Perry do anything to help his mother get parole?

This story is filled with hope, compassion, love, and understanding. We see Perry get understandably angry with district attorney VanLeer – and figure out a way to rise above his anger. We see the power of learning people’s stories, even someone like VanLeer.

Find this review on Sonderbooks at: www.sonderbooks.com/Childrens_Fiction/perry_t_cook.html