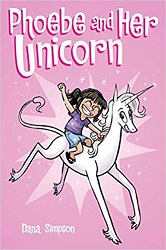 Phoebe and Her Unicorn

I was sent some later volumes about Phoebe and Her Unicorn and realized at last what I’d been missing. I’d even had this first volume checked out, but never cracked it open.

This time, I read the Introduction by Peter S. Beagle, author of The Last Unicorn, and I knew I needed to read this. He mentions that in the early pages of his book, he wrote, “Unicorns are immortal. It is their nature to live alone in one place: usually a forest where there is a pool clear enough for them to see themselves – for they are a little vain, knowing themselves to be the most beautiful creatures in all the world, and magic besides . . .”

A little vain . . . Marigold would be an appalling monster of ego, utterly self-concerned and completely unlikable, if it weren’t for her sense of humor and her occasional surprising capacity for compassion – both crucial attributes when bound by a wish granted to a nine-year-old girl in need of a Best Friend to play invented superhero games with, to introduce to slumber parties and girl-talk gossip and to ride through the wind after being called nerd and Princess Stupidbutt one time too many. For Phoebe is a remarkably real little girl, as bright and imaginative as Bill Watterson’s Calvin, as touchingly vulnerable as Charles Schulz’s Charlie Brown. And if these strike you as big names to conjure with, I’ll go further and state for the record that in my opinion Heavenly Nostrils is nothing less than the best comic strip to come along since Calvin and Hobbes. Simpson is that good, and that original.

And yes, he’s right — Phoebe and her Unicorn is in the tradition of Calvin and Hobbes, this time with a nerdy and precocious little girl – so perhaps I related a little more than to Calvin.

However, Phoebe’s Unicorn, Marigold Heavenly Nostrils, is not an imaginary friend. She’s real, and people can see her, but unicorns are protected by a SHIELD OF BORINGNESS. (This word should be printed in a fancy font.) As Marigold explains, “The SHIELD OF BORINGNESS is a bit of spellcraft that allows unicorns to remain a myth. Those humans who have seen us don’t find it important enough to mention.”

It helped me enjoy the book more once I realized this is a comic strip collection. There is an ongoing story, but most of the strips end with a joke. And they’re good jokes! (Okay, I like the unicorn puns about Phoebe being pointless.) It helped me enjoy reading them more when I realized what I was reading.

There is an ongoing story. But there are also comic-strip traditions in play. For example, Phoebe is a fourth grader at the start of the book. Then she has a lovely summer off and goes back to school – and starts fourth grade.

And like other great comic strips, there are profound observations behind the jokes. This is a lovely book about a nerdy little girl who wants to be awesome, about a unicorn she rescued (by hitting her with a rock and breaking her out of the cycle of gazing at her own reflection) who granted a wish by becoming her best friend, and about a unicorn who is well aware that she is the loveliest thing on the planet.

Find this review on Sonderbooks at: www.sonderbooks.com/Childrens_Fiction/phoebe_and_her_unicorn.html