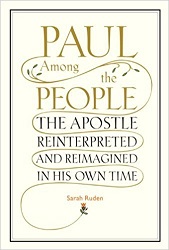 Paul Among the People

The Apostle Reinterpreted and Reimagined in His Own Time

I checked out this book because I’d read and loved the author’s book The Face of Water (written later) where she takes a fresh look at the translation of several biblical passages.

In this book, the author uses her knowledge of Graeco-Roman literature and culture to take a fresh look at Paul and give us the cultural context of his writings.

Now, I didn’t find this book nearly as pleasant as The Face of Water. The fact is that the context of Paul’s writings was rather horrible. Slaves were not really considered people. Homosexuality was commonplace – but the only one despised was the passive partner. Paul spoke against those who preyed on others, the people his culture thought were real “man’s men.” He was speaking against oppression, and not really from anything like the same context from which we look at those things.

But my summary doesn’t do this work justice. It opened my eyes – though not always in ways I wanted them opened. She examines Paul and pleasure, Paul and homosexuality, Paul and women, Paul and the state, and Paul and slavery. In the context of his own culture, Paul’s words take on a whole new aspect. He’s much less harsh – in fact, he’s speaking up against a harsh culture.

But I think my favorite chapter was the final one, “Love Just Is: Paul on the Foundation of the New Community,” where she looks at I Corinthians 13, “the Love Chapter.” There were plenty of insights I’d had no idea about (how the “clanging cymbal” relates to the cult of Cybele for example). I especially liked finding out that the list of qualities of love that begins in verse 4 (“Love is patient; love is kind….”) are all verbs.

It’s more or less a necessity of our language that the standard translations here contain a lot of adjectives. The Greek does not contain a single one. Instead we have a mass of verbs, things love does and doesn’t do. This is the ultimate authority for the saying “Love is a verb.” . . .

So manically verb-centered is the passage that Paul takes two adjectives and creates a one-word verb from each (neither verb being attested previously in Greek); and he creates yet another verb, in Greek a one-word metaphor….

Pick up this book if you’d like a fresh look at the backdrop the Apostle Paul wrote from.

Find this review on Sonderbooks at: www.sonderbooks.com/Nonfiction/paul_among_the_people.html