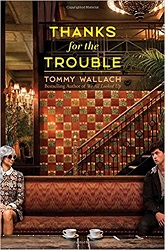 Thanks for the Trouble

This book opens as Parker Santé is in a hotel, looking for something to steal. He sees a girl with silver hair pay for her coffee.

She reached into her purse and pulled out the fattest stack of hundreds I’d ever seen in real life. I’m talking a hip-hop video kind of wad, thick as a John Grisham paperback. She peeled off one of the bills — (I see you, Mr. Franklin) — and handed it over. “Keep the change,” she said. The waiter nodded a stunned little bobblehead nod, then peeled out before the girl could think better of her generosity, leaving her to tap idly at the top of a soft-boiled egg in an elaborate silver eggcup. I stared at her staring off into space, and counted the many ways in which she was incredible.

He’s attracted to the girl, but that doesn’t stop him from stealing the wad of cash when she leaves her purse behind. However, he makes a fundamental mistake, a mistake that reminds him of the myth of Orpheus.

But my dad said it was the most perfect myth ever written, because it represented the most fundamental human error: we all look back.

When I did, I saw that the silver-haired girl had returned to her seat. In spite of the fact that her purse was open and half its contents had spilled out across the tablecloth, she wasn’t screaming or crying or scrambling around, looking for the culprit. Why, you ask? Because she’d been distracted by something else. By what, you ask? Well, by my journal, of course! I’d left it behind when I tore off with all that money. It had my name in it, and my e-mail address, and an incredibly embarrassing story I’d recently written called “The Most Beautiful Girl in the Kingdom,” which she was now reading.

They get to talking. Or, I should say, the girl talks and Parker writes. Parker hasn’t been able to talk since the accident when his dad died.

But the girl tells him her plan:

“I am waiting for a phone call. And when it comes, I’m going to give this money to the first needy person I see. Then I’ll take the trolley to the Golden Gate Bridge and jump off it.”

Parker doesn’t like the sound of that. So he negotiates. He thinks he’s talking her out of jumping off the bridge, but they end up with the deal that she’s going to spend all that money on him (and with him), and he is going to apply to and attend college.

As their adventure takes off, they get to know each other better. When Parker tries to find out more about Zelda, she tells him that she was born in 1770 in Kassel, Germany. She doesn’t age.

Now her second husband is dying of old age, and she’s had enough.

But whether or not he believes her, Parker has some things to show her about life.

And she has many things to teach Parker.

I like all the questions this book opens up. What would it be like not to age? What would you do?

I wasn’t crazy about the framing — It’s supposedly Parker’s college application essay. I didn’t actually believe you’d be able to submit a book-length manuscript online. Though that does add to the fun because you don’t know if it really happened to the character. Though it certainly supports how dramatically his life changed.

An entertaining book that you can think about for a very long time.

Find this review on Sonderbooks at: www.sonderbooks.com/Teens/thanks_for_the_trouble.html