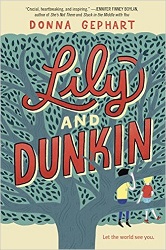 Neither Lily nor Dunkin is happy with the name they were given at birth. Dunkin doesn’t like his name because it’s Norbert Dorfman, after his grandfather and great-grandfather. Lily doesn’t like her name because it’s Timothy. Lily knows she’s really a girl, and is trying to be brave enough to wear girl’s clothes to school when eighth grade starts, but she doesn’t quite manage it.

Dunkin met Lily before school started, and even saw her wearing a dress, but when he asks about it, Lily backs down and says it was just on a dare. Dunkin would like to be friends with Tim at school, but when the guys on the basketball team take an interest in him because he’s so tall, he can’t stay away — even though they’re the same guys who bully Tim.

On the surface, this is an issue book. Lily is dealing with being transgender and trying to get up the courage to go public with that. She also wants to go on hormone blockers before it’s too late, but her Dad’s having a hard time with it.

Meanwhile, Dunkin has his own issues. He’s got bipolar disorder. His mother decided to trust him to take his own medication this year. But if he takes his antipsychotic pills, he doesn’t have enough energy to play basketball. So he sneaks a pill into the trash each day.

As an issues book, I enjoyed this. It’s for a slightly older reader than George but I like the way both books help you understand how it would feel to be transgender and some of the many difficulties you’d face.

But the book does have more to it. There’s navigating friendships and eighth grade, and there’s an old tree in front of the library that’s scheduled to be cut down. It’s a tree that meant a lot to Lily and her grandfather who is now deceased. As for Dunkin, he’s the new kid. He’s just moved to Florida, leaving behind some kind of family disaster involving his Dad. He knows nothing about basketball, but now he has a chance to be somebody because he got his growth early. If he can learn enough about the game before it’s time to play.

Find this review on Sonderbooks at: www.sonderbooks.com/Childrens_Fiction/lily_and_dunkin.html