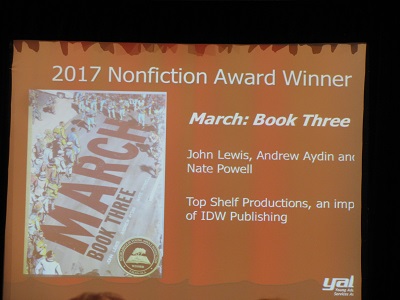 There are two youth media awards which have the Finalists announced ahead of time — the Morris Award for a debut author of a young adult novel, and the YALSA Excellence in Nonfiction.

Because the Finalists are known ahead of time, they can be invited to give a speech at the awards ceremony at ALA Midwinter Meeting. That morning, they will find out which one is the winner, but all are thrilled to be there.

It’s always a treat to attend this ceremony. The Morris Award Finalists are especially fun to listen to. These are debut novelists. They are still thrilled to be published, let alone to win an award. I’ll give some tidbits from their speeches.

This year, honestly, the speeches were the occasion for a John Lewis lovefest. Happening at the end of a significant weekend and in Atlanta, the heart of John Lewis’s district, after he joined in the Women’s March on Saturday — each speaker mentioned how much they love and respect him. And the crowd roared.

The Morris Finalists were first.

M-E Girard for Girl Mans Up:

She was okay with thinking of this book as a niche story. Her character’s a girl, but not in acceptable ways, but with normal teen questions about things like family relationships and friendships. After getting comments from teens, she’s found that her character’s a lot more universal than she’d thought. Librarians are getting her book to the right readers. Why? It must be a calling.

Sonia started out with a rap speech. Her character is not your typical girl next door. She has diversity within diversity. The author is a child psychologist, and she wrote a character who has trauma-related brain damage. She’s emotionally delayed and sees people by how they make her feel. Rani opens our eyes to the long-term damage from abuse.

Bonnie-Sue Hitchcock for The Smell of Other People’s Houses

She thanked Mrs. Long, her elementary school librarian who picked out books just for her. She was someone who saw her as a person and noticed what made her tick. This is a book about Family that happens to be in Alaska. Even today’s Alaska is not the same as it was when she was growing up. As a kid, everything seems normal. The message they were taught was “Don’t be vain, and don’t ever talk about yourself.”

Calla Devlin for Tell Me Something Real

As a child, books and the library were her salvation. The library was also her future. A kid asked her, “What if no one wants to hear my story?” An important part of being a teen involves finding your voice. Librarians introduce teens to whole new worlds.

He began the book on January 20, 2014. It was written mostly on his iPhone. He wanted to talk about the most ferocious sort of love between friends who fill the place of family for each other. They’re wrestling with faith, division, and disparity in America. There’s a festering poison in rural America that makes people afraid. He wanted to show young people wrestling with this. There’s a fundamental failure of empathy.

But stories build empathy. Stories are like fire: They give light, warmth, and they burn to let new things grow. The soul of our nation depends on getting stories to young people.

Then we heard from the YALSA Excellence in Nonfiction Finalists:

At a time when the world’s tempted to divide the world between winners and losers, this award makes her feel like a winner. Hillary Clinton is still the most admired woman in America, according to a recent Gallup poll. In doing the research, Karen had to learn lots of terms for unpleasant women. Research was a challenge to learn what was actually true. She didn’t find any evidence that Hillary really did throw something at Bill in the White House, for example. She had to write two versions of the paperback ending, because it was due on November 9th.

Young people deserve to hear the full story. She mentioned this quote from Hillary: “Please never stop believing that fighting for what’s right is worth it.” Some other new terms Karen had to deal with were “gaslighting,” “fake news,” and “alternative facts.” The work of librarians is fighting for truth! Few trailblazers ever get to see their work completed. Hillary Rodham Clinton is a winner. And this is a life worth sharing.

Kenneth C. Davis for In the Shadow of Liberty

He speaks as a child of the public library. The library made him a reader and also a writer.

How could men who risked all for freedom go home to plantations dependent on slave labor? He decided to focus on 5 slaves of 4 great presidents.

William Lee was a manservant to Washington. Ona Judge was the tailor who sewed his uniform. She eventually escaped. Isaac Jefferson was in Yorktown with the British. He was taken back into bondage. Paul Jennings was taken to the White House as a 10-year-old child. Alfred Jackson was tried for murder and President Andrew Jackson paid for his defense. Alfred Jackson lived until 1901 — This is not ancient history. American slavery was a crime against humanity of epic proportions.

Today we celebrate literacy and reading. They can make us free!

Yoshitsune is like King Arthur, but his story is true. Mostly. The author had no idea that sifting knowledge from fakery would be so timely. Fan fiction is not an invention of the 20th Century. Yoshitsune is deeply embedded in Japan’s national history. It’s crucial to teach young people what nonfiction is and how and why it’s fictionalized.

Linda Barrett Osborne for This Land Is Our Land: A History of American Immigration

Librarians are the front line; authors are the supply line. Her book wasn’t as timely when she started writing it in 2013. What do we mean when we say, “This land is our land”? There’s nothing new about saying awful things about immigrants. Benjamin Franklin spoke against Germans. Our history shows us why we fear, but also invite, immigrants. People come here to make a better life for their children.

The book spans four centuries. There are many parallels between then and now. Negative comments about immigrants are remarkably unchanged.

Some surprising facts:
Immigrants from Asia were not allowed to become citizens until 1952.
The first patrols along the Mexican border in 1890 were aimed at keeping Chinese people out, not Mexicans.

Her book also tells about the immigrants themselves. We have the power if we want to treat immigrants with compassion and respect, not fear and hate.

He didn’t grow up in a big city, but in rural Alabama, poor, with six brothers and three sisters. As a kid, he asked “Why?” about things like signs for different bathrooms. Teachers and librarians told him to Read. We should teach people to find a way to get in the way. He got in trouble, necessary trouble. His late wife was a librarian. She also taught him to have a love of books. With books you could travel!

As a young child, he wanted to be a minister. He used to preach to the chickens. Some of those chickens listened to him better than his colleagues today in Congress. Some are more productive.

Keep the faith! When you see something not right, tell people to be brave! 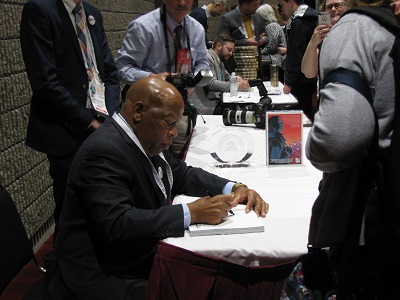 Then we were told each of us could choose 3 of the award-winning books to have signed. I went first to John Lewis’s line (and shook his hand), then Kenneth C. Davis’s line for In the Shadow of Liberty, and then Jeff Zentner’s line (the person signing behind John Lewis in the photo above), for The Serpent King.

I’m afraid this year I hadn’t read any of the books receiving awards. But that’s going to change!