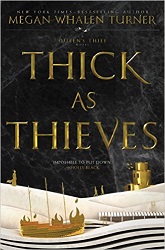 Here’s how eagerly I’ve been looking forward to this book: First I reread three books in the Queen’s Thief series in the week before ALA Midwinter Meeting in January. (I couldn’t find my copy of the first book, The Thief. I am going to order myself a new copy.) I looked up the number of the HarperCollins booth at ALA, and on opening night of the exhibits, I went straight there, without passing Go. I asked for and received an advance reader copy of Thick as Thieves. I had my reading material for the rest of the conference!

There’s a note at the front of the advance reader copy from the author. She says, “If you’ve read any of the other Queen’s Thief books, there are characters here you might recognize and be happy to spend time with again. If you haven’t read any of my other books, you can start with this one if you like. Every book spoils some other book, just a little, so there are advantages and disadvantages no matter where you begin.”

On the back of the book, it says that Megan Whalen Turner is the “bestselling and award-winning author of four other stand-alone novels set in the world of the Queen’s Thief.” The “stand-alone” part is arguable. I think you’ll enjoy them more if you read at least the first three books in order.

However, they have a case about this book being stand-alone. I think I might have enjoyed it more if I hadn’t been so impatient for Eugenides (the Queen’s Thief) to show up and for me to find out what he was up to. (I knew he was up to more than met the eye.)

Anyway, this book is set in the Mede empire, focusing on Kamet, the slave of the Mede ambassador to Attolia, who was a part of the second book, The Queen of Attolia. Now they are back home, and Kamet is again close to great power. His master, whose affairs he manages, is the nephew of the Mede emperor, and brother of the emperor’s chosen heir.

As the book begins, Kamet is accosted in an alleyway by an Attolian, who tells Kamet to meet him at the docks after dark. The Attolian will escort Kamet to freedom.

Kamet pretends to go along with it, but he’s laughing inside. Here are some of the reasons why he is happy in his place:

As a slave in the emperor’s palace I had authority over all of my master’s other slaves and most of his free men. I had my own money in my master’s cashbox. I had a library of my own, a collection of texts in my alcove that I carefully packed into their own case whenever my master moved households. I not only could read and write, I could read and write in most of the significant languages of the empire. My master had paid good money for it to be so. Someday he meant to make a gift of me to his brother, and then, as the next emperor’s personal slave, I would be one of the wealthiest and most powerful men in all the empire. I wouldn’t have taken the Attolians’ offer even if I’d believed it was sincere – and I didn’t. They meant to slice my throat and toss me in a sewer, I was sure.

But that same day, something happens to change Kamet’s mind. A friend in the household informs him that their master has been poisoned in his room.

When a man is murdered, his slaves are tortured. If any confess, then all are executed whether they share in the guilt or not. No one will buy them and they can hardly be freed – what a temptation that would put before the enslaved population. In the case of a poisoning, where the administration of the poison is unclear, the slaves are put to death on principle. The Medes fear little in quite the way they fear their own slaves.

So Kamet lets the Attolian help him escape. Most of the book deals with their adventures trying to escape the Mede empire and get to Attolia. All the while, Kamet has not told the Attolian that his master is dead and he’s a wanted man. The Attolian thinks that the emperor’s elite guard are after them because an important slave has escaped. They must deal with pursuit, slavers, hunger, illness, and many other pitfalls along the way.

As with the other books in the series, Megan Whalen Turner has her characters telling each other myths about the gods. I enjoyed that this time, as tales from the Mede empire, they are in a completely different style from the tales told in the earlier books. Those resembled Greek myths, and these resemble Assyrian tales. As before, the tales told mirror situations the travelers face.

Now, I wanted the journey to finish a lot sooner than it did. I suspect that might not be as much of a problem for folks who aren’t already familiar with the series. Also, the Advance Reader Copy has blank pages that it says will be filled with maps. I think maps would really help me enjoy the story of the journey more, so I could see that the two are making progress. As it is, without a map it feels like the journey is going on and on, facing obstacle after obstacle. This is enough motivation for me to preorder the finished book, despite having this advance copy. (And advance copy isn’t enough for one of my very favorite series!)

In the big picture of the series, we know that the Mede empire is eventually going to attempt to annex the three kingdoms of the peninsula. In the previous books, the big picture story focused on getting those three kingdoms to stop fighting one another so they could deal with the Mede threat. In this book, we saw one small step in holding off that threat a bit longer.

Find this review on Sonderbooks at: www.sonderbooks.com/Teens/thick_as_thieves.html