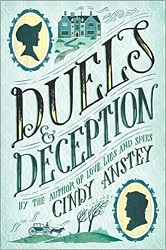 Oh, these Cindy Astey Regency romances are so much fun! In this one, we meet Lydia Whitfield, a friend of our heroine from Love, Lies and Spies, but you don’t have to read the first book to enjoy this one.

Lydia thinks of herself as not romantic at all. Before he died, her papa picked out the man she should marry, Lord Aldershot, so their estates could be joined. Lydia wants to draw up a contract about the arrangements between them – and gets kidnapped! Her carriage is diverted, while the handsome young law clerk is in it. He is shortly thrown out, but after Lydia is imprisoned in an abandoned barn, Mr. Newton comes to rescue her.

Together they seek to investigate who was behind the nefarious plot. But whoever it was wants to destroy Lydia’s reputation with knowledge that she was out all night in the company of a young man. Unless she will give in to blackmail.

Meanwhile, Lydia’s drunken uncle is guardian of her estate together with a lawyer who’s showing signs of senility. And Mr. Newton’s friend got himself embroiled in a duel.

Lydia’s a delightful heroine and it’s lovely to watch her figure out she might think romance is a good thing, after all.

Here’s how the book begins. You get a nice taste of Lydia’s character. It also leads up to the carriage accident, caused by her uncle, which is where she first meets Mr. Newton.

Had Miss Lydia Whitfield of Roseberry Hall been of a skittish nature, the sound of a rapidly approaching carriage would have caused considerable anxiety. As it was, the driver behind her did nothing to stay her steps. Besides, she recognized the bells on Esme’s harness and Turnip’s nicker of protest – poor creature hated to canter. The vehicle could be none other than the family landau.

However, as the nickering changed from protest to panic, Lydia was certain the carriage was now descending the steep hill too quickly. The road from Spelding was rocky and rutted, especially in the spring, and it made for a rough ride. Most drivers took it at a walk.

But not this driver.

This book was simply tremendous fun. If you like Jane Austen at all, this is more fast-paced, but still gives you a lovely taste of that world, with remarkable characters you’ll enjoy spending time with.

Find this review on Sonderbooks at: www.sonderbooks.com/Teens/duels_and_deception.html