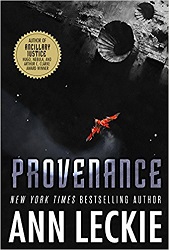 Ann Leckie is incredibly skilled at building alien worlds and cultures and imagining how they will interact with each other. Provenance is set in the same universe as her brilliant Ancillary trilogy, after those events have taken place, but you don’t have to read the first trilogy to enjoy this book, which takes place on a different set of planets altogether.

We’re following the actions of Ingray, the foster daughter of the Netano, a powerful political leader on the planet Hwae. The Netano hasn’t yet chosen which of her children will be her successor, and Ingray has spent all her money trying to show up her brother Danach. She’s trying to break a person out of Compassionate Removal, a lifetime prison planet, and find out from him where he put the originals of the vestiges he stole and replaced with forgeries.

The first problem is that the person she’s broken out is delivered in a suspension pod. When he awakes, he says he is not the person she sought. And the captain of the ship she’s taking back to Hwae is in trouble with the ambassador from Geck – an alien race that no one dares offend.

This one is similar to the second Ancillary book, Ancillary Sword, in that it reveals a seething mass of complicated local planetary politics. On Hwae, vestiges are revered and important – souvenirs and artifacts from important events. But some of the most revered vestiges may not be authentic. Then there are the people from another planetary system who want control of the gate in another system. Then there are the oh-so-alien Geck and the upcoming Conclave to renegotiate the treaty that keeps them from killing humans.

In this book, we aren’t dealing with the sentient Artificial Intelligence of the earlier books, though some people have mechs they can pilot with thought. But Hwae culture does have three genders, and I liked the way that was seamlessly woven into the story, including the pronouns used for the gender that’s neither male nor female – e, em, eir. The pronouns were used naturally and made a lot of sense. It seemed much more natural than using they, them, and their as singular pronouns.

I also like the way she shows us the importance of the vestiges and how they work, as well as the process on Hwae of naming a successor, who can then stand in for the person who does the naming. She weaves these details in seamlessly without spending all our time on exposition. We find out when it’s important to the plot.

The various plots and counterplots, including a murder mystery, finish up with the tension of a life-threatening hostage situation, so you’ve got a suspenseful read as well as a fascinating look at what alien cultures might be like.

After reading an Ann Leckie novel, I come away thinking – Now, why did we think that alien cultures would be so much like our own? Oh yeah, that way it’s easier to use human actors in science fiction films. Reading this book will open your mind to many more possibilities.

Find this review on Sonderbooks at: www.sonderbooks.com/Fiction/provenance.html