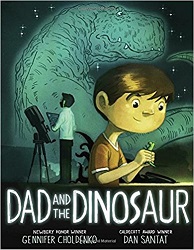 Dad and the Dinosaur

Nick wants to be brave like his dad. And people think that he is when he goes rock climbing and faces down a big, tough goalie on the soccer field.

But what other people don’t know is that the reason Nick can be brave is because of his companion, a toy dinosaur that goes with him everywhere. The dinosaur gives Nick the courage of a dinosaur.

So when the dinosaur falls out during a soccer game, Nick loses all his courage.

But it turns out that Dad knows exactly what to do.

This is a charming story of a kid who admires his father and wants to be like him – and a father who knows how to treat his son’s feelings with deep respect.

The illustrations are perfect. While Nick is holding his dinosaur, we see a shadowy dinosaur in the background, big and bold and brave. When Nick has lost the dinosaur, the world is a scarier place, with tentacles coming up from under a manhole cover ready to pull him down.

Together the story and illustrations hit just the right note. We see a kid who’s brave like his amazing dad, with the help of his friend the dinosaur.

Find this review on Sonderbooks at: www.sonderbooks.com/Picture_Books/dad_and_the_dinosaur.html