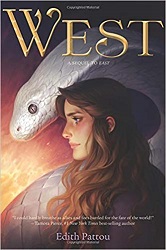 I was so excited when I found out West was coming out! I still remember, approximately 15 years ago when I was working at Sembach Library and a shipment of new books came in that included East, by Edith Pattou and The Goose Girl, by Shannon Hale – two fairy tale retellings that ended up being my two favorite books of the year. I ordered my own personal copy of both of them, I liked them both so much. The Goose Girl has become the start of an entire series since then, but this is the very first follow-up to East.

Since this is my Newbery committee year, I didn’t get to reread East before reading West as I would have liked to do. But I remembered the basics, from the fairy tale “East of the Sun, West of the Moon.” Rose went off with a white bear to save her family, but used a candle to try to see his face and then had to travel east of the sun, west of the moon. In the end, she had to defeat the Troll Queen in order to save him. They were supposed to live happily ever after.

But in this book, we learn that the Troll Queen is not dead. And she’s ready to get revenge, not only on Rose and Charles, but on the entire human race.

Like the fairy tale it all began with, this book is something of a saga. Rose and Charles now have a baby boy and an adopted daughter. As the book begins, Rose was visiting her family in Trondheim while Charles was performing as a court musician in Stockholm. But word comes that there has been a shipwreck of the ship Charles was taking home. There’s something off about the report.

In this book, it’s very much a case of one thing leading to another. Rose ends up taking a journey every bit as taxing as the one that took her east of the sun, west of the moon. Again her quest requires ingenuity, perseverance, and resourcefulness.

But it also requires help from others. Once she finds Charles (that’s the first difficult part), he helps. But so do her brother Neddy and her friend Sib, and so does Estelle, the little girl they adopted, who is kidnapped by the Troll Queen along with their son and watches over him. It turns out she also needs help from the Fates themselves.

The journey takes Rose in every direction on the compass in her quest to save her beloved husband, then her son, and even all humankind.

The Troll Queen is a formidable opponent and frightening in her power and her hatred. But Rose has something stronger in the power of love.

This is another gripping adventure saga with all the resonance of a fairy tale.

Find this review on Sonderbooks at: www.sonderbooks.com/Teens/west.html