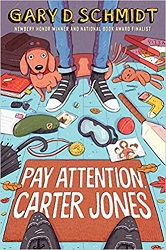 This book was delightful. I shouldn’t have chosen it to read during Silent Book Club, because I kept coming to spots that made me chuckle. My friend was reading Game of Thrones, and she said it was a little incongruous. Oops!

And yet some serious topics are covered in this book. There’s a little brother who died and an absent father. So that my primary response was chuckling shows that the serious topics were handled with a light touch and my overall response is delight.

If it hadn’t been the first day of school, and if my mother hadn’t been crying her eyes out the night before, and if the fuel pump on the Jeep had been doing what a fuel pump on a Jeep is supposed to be doing, and if it hadn’t been raining like an Australian tropical thunderstorm – and I’ve been in one, so I know what it’s like – and if the very last quart of one percent milk hadn’t gone sour and clumped up, then probably my mother would never have let the Butler into our house.

As it was, it was a crazy morning, and Carter Jones was the one who answered the door when the Butler rang their bell.

That son is Carter’s father, who is now serving with the military in Germany. But the family can definitely use his services, though Carter’s not so sure he wants someone calling him “Young Master Jones” and requiring him to behave with good manners.

And then the Butler dresses Carter up in white, along with his friend Billy, and takes him to the school football field to learn to play cricket.

There are tidbits about the game of cricket at the start of each chapter – and I’m still completely confused by the rules. Though I do have a much better idea of how it works than before I picked up this book.

The whole idea of a proper English gentleman’s gentleman dealing with an American sixth-grade boy is what gives this book layers upon layers of humor. Carter Jones, though, is dealing with some big issues – and Mr. Bowles-Fitzpatrick also has compassion, in his proper English way.

I finished this book with a smile on my face. Completely delightful!

PS: Something else I loved about the book was that the principal was Principal Swietek! And the town is Marysville! Why is that so exciting? We find out who Doug Swietek married from Okay for Now, which was set in Marysville in the sixties. (The principal is female and her first name is given at one point.) Very fun for Gary Schmidt fans. In fact, I reread my review of Okay for Now, and yes I was right that it was the same town. Now I want to reread the book.

Find this review on Sonderbooks at: www.sonderbooks.com/Childrens_Fiction/pay_attention_carter_jones.html