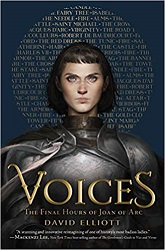 The Final Hours of Joan of Arc

Voices is a novel in poetry – and I mean real poetry here, not simply prose broken up into artful lines. For the most part, it’s even rhymed poetry. David Elliott gives us Joan of Arc thinking about her life as she waits to be burned at the stake.

Between poems in Joan’s voice, we’ve got poems expressing the voices of objects and people in her life – things like a tunic, armor, cattle, a red dress, swords, and the saints who spoke to her. For those poems, the author used poetic forms that were used even back in Joan’s day – things like a ballade, sestina, villanelle, and triolet.

The note at the front casts light on short quotations presented throughout the book:

Much of what we know about Joan of Arc comes from the transcripts of her two trials. The first, the Trial of Condemnation, convened in 1431, found Joan guilty of “relapsed heresy” and famously burned her at the stake. The second, the Trial of Nullification, held some twenty-four years after her death, effectively revoked the findings of the first. In both cases, the politics of the Middle Ages guaranteed their outcomes before they started. It is in the Trial of Condemnation that we hear Joan in her own voice answering the many questions her accusers put to her. In the Trial of Nullification, her relatives, childhood friends, and comrades-in-arms bear witness to the girl they knew. Throughout Voices, you will find direct quotes from these trials.

The craft in this book is stunning – the various poetic forms are used skillfully. Many are typed in the shape of the object whose voice is heard. I’m not used to a novel in verse using so much rhymed poetry, and using it well. I was a little disappointed, though, that the words didn’t move me as much as I felt like they should have – and that may just be me. I do find myself wanting to read it again – there’s a lot of depth here concentrated in the few words of poetry. (Or better yet, I would like to listen to this in audiobook form.)

A couple of things stood out to me. One was the poems in the voice of the Fire, waiting to burn Joan. Those poems were eerie and disturbing. Another was that in her trial the way they knew she was of the devil was that she dressed like a man. Things have not changed so much in 500 years.

Whatever else this book is, it’s a stunning accomplishment.

Find this review on Sonderbooks at: www.sonderbooks.com/Teens/voices.html