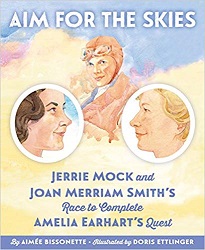 Aim for the Skies

This picture book tells about two women who both decided independently to complete Amelia Earhart’s around the world airplane trip. They both set out on their journey in March 1964. They traveled different routes, but the press reported it as a race. Yes, one of them became the first woman to fly solo around the world. But the other became the first person to fly the longest distance alone – using the same route as Amelia, around the equator.

The book gives the background of each woman, what got them interested in becoming a pilot and why they took on such a grand adventure. And then, of course, dramatizes the race around the world.

This is an interesting story of two women who accomplished amazing things – both in honor of Amelia Earhart before them.

Find this review on Sonderbooks at: www.sonderbooks.com/Childrens_Nonfiction/aim_for_the_skies.html