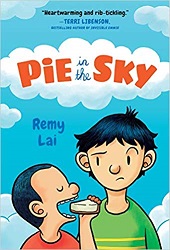 Pie in the Sky

I only read this book because someone nominated it to Capitol Choices (a group of DC-area librarians who select what we think are the 100 best children’s book of the year), but I thought the cartoony cover and comic panels woven through the text meant it would be too much like the Wimpy Kid books for me. I ended up wholeheartedly loving it.

Now, there are lots of comic panels included, which I think makes the book all the more accessible. But the story goes a lot deeper than you might think.

Jingwen and his annoying younger brother Yanghao are moving with their mother to Australia. The book never tells which country they’re moving from, though the author was born in Indonesia, grew up in Singapore, and now lives in Australia. (So alas! It’s not eligible to win the Newbery.)

I like the way the comic panels show people talking with words Jingwen doesn’t understand as speech bubbles with strange squiggles. At first, he feels like he’s on an alien planet, and draws them as space aliens. But after awhile, he feels like he is the alien, and draws himself with six eyes and tentacles.

But this isn’t only about Jingwen and Yanghao adjusting to a new country with a new language while their mother works hard and leaves Jingwen to tend Yanghao much of the time. The book is also about Jingwen working through how much he misses his Papa, who died two years earlier.

Papa had talked about moving to Australia. He was going to open a fancy cake shop there and call it Pie in the Sky.

Papa’s English was only slightly less terrible than mine, but he knew a pie is not a cake. It’s just that he had a friend who spoke fluent English who told him the meaning of the idiom pie in the sky — an impossible dream.

Back home, Jingwen’s parents worked in his grandparents’ bake shop. But on Sundays, Jingwen’s Papa used to bake fancy cakes with Jingwen, cakes they planned to sell in their future Pie in the Sky cake shop.

Jingwen decides that what he needs to do to make life go better in Australia and to properly honor his Papa is bake all twelve of the Pie in the Sky cakes. Never mind that their mother doesn’t want them to touch the oven while she is not home.

They buy ingredients and he makes a list of rules for Yanghao to follow so he doesn’t cause trouble and give everything away.

But the plan isn’t simple to carry out. And meantime, he’s trying to adjust to a new country and a new language, which his annoying little brother picks up much more quickly.

This book with comic panel illustrations has an amazing amount of depth and poignancy.

“When someone is feeling sad, they can’t help but smile at the sight of a cake.”

Find this review on Sonderbooks at: www.sonderbooks.com/Childrens_Fiction/pie_in_the_sky.html