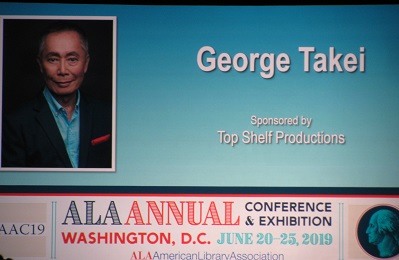 On the final day of ALA Annual Conference 2019 in DC, I made sure to get there by 10:30 to hear George Takei speak.

This program was telling about his upcoming graphic novel memoir, They Called Us Enemy. These are my notes on his talk. 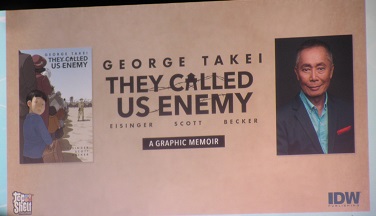 George’s family was interned during World War II. When he was five years old, he was classified as an enemy and a threat by his own country.

It was completely irrational. They were born here.

Next, there was a curfew. Japanese-Americans must be inside from 8 pm to 6 am.

Then bank accounts were frozen.

On February 19, 1942, FDR signed executive order 9066. All Japanese Americans were rounded up and imprisoned in ten barbed-wire prison camps in some of the most desolate places in America. 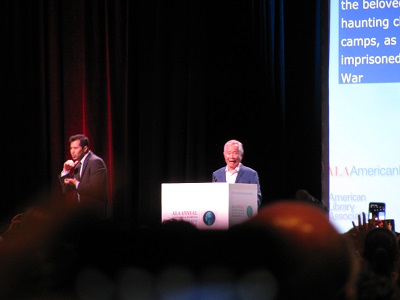 Armed soldiers pounded on the front door. They were ordered to leave at gunpoint.

They were taken from Los Angeles to a camp in the swamps of Arkansas.

He remembers the spotlights that would shine on him at night. He thought it was nice that they lit the way for him to pee at the latrines at night.

He was five years old, so he didn’t know any better. It all became routine.

There was a barbed wire fence and a sentry tower outside the school where they recited “liberty and justice for all.”

In his upcoming graphic memoir, They Called Us Enemy, he tells this childhood story.

It also focuses on what his parents were going through — so much harder for them.

This is an American story.

The imprisonment was ordered by the president of the United States.

George became curious as a teen — but the books were silent about his childhood experiences. He learned about it through long and heated discussions with his father.

His father told him that our democracy is a people’s democracy. People have the capacity to do amazing things, but people are fallible and sometimes make horrible mistakes.

That conversation drove him to the Adlai Stevenson campaign headquarters to volunteer.

For democracy to work, people need to act.

There are many similar chapters in American history to this one he tells.

He tells the story because of hope.

We are a nation of immigrants. Immigrants saw the Statue of Liberty — and it underscored their hope.

His grandparents turned what was considered wasteland into rich farmland. His other grandparents built a newspaper.

When they came back to LA, they felt like immigrants again.

Then George introduced the people who helped make the graphic memoir happen: Harmony Becker, Steven Scott, and Justin Eisinger. They continued the talk as a discussion.

HB: She’s half Japanese. She learned in libraries about Americans of Japanese descent being interred. It was jarring to realize as an adult that not everyone knew about that.

JE: This book exists to pass this information on to another generation.

GT: He hopes librarians will convey the story to as many people as possible. Harmony did a great job capturing his parents’ love for each other.

His mother actually smuggled into the camp her favorite portable sewing machine.

Harmony nailed it through the eyes of children.

JE: It’s a history book. It’s George’s story, but also how it happened in history.

GT: His mission in life is to tell everyone: We all need to participate and make our democracy a truer democracy.

We’re a majority who uphold these values. It’s shameful that less than half the population vote.

He hopes the next generation will be better Americans, and the Parkland students give him hope. Young people will encourage more young people.

The story is continuing on the southern border.

We find many enemies through our history. Our country’s diversity is our strength.

An acronym from the starship Enterprise: IDIC: Infinite Diversity in Infinite Combinations. On the ship they represented Asia, Africa, America, and Aliens.

They had to update the book after the Muslim ban and detention at the border.

SS: They could not have predicted how relevant the book would be.

GT: A lot of the text is from his book To the Stars. It’s unsettling to know that American citizens can be deprived of their citizenship during wartime.

Many younger Japanese Americans don’t even know about this because the older ones were too ashamed to talk about it. Many don’t even know in which camp their parents or grandparents were detained. 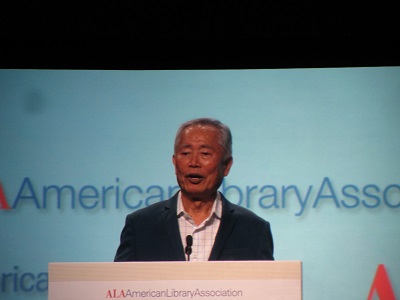 I got in line while he was still taking questions. 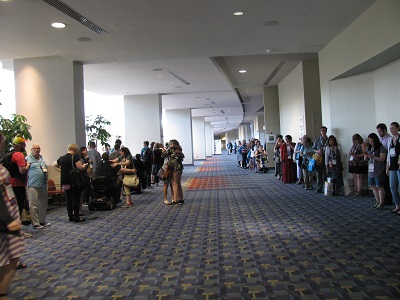 The line was very, very long. It turned out, they were giving out a very short excerpt, but I didn’t find that out until I was almost to the front. 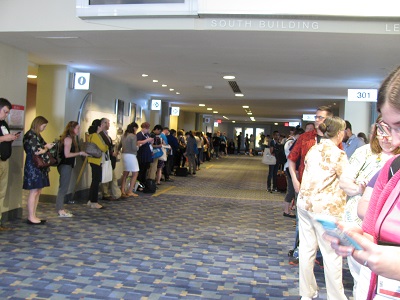 I met Brad Takei, too! (Or at least I was this close to him.) 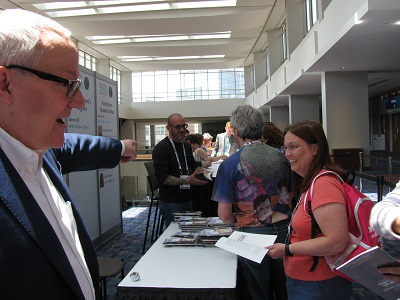 The other creators of the new book signed as well. 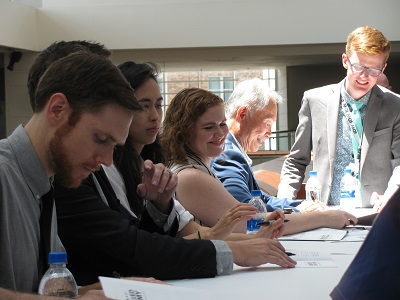 I thanked George and said how sorry I am that the book is so timely. That did get me eye contact! I’m looking forward to telling kids in the library about this book. The excerpt is amazing! 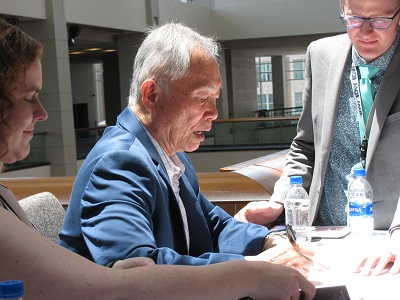