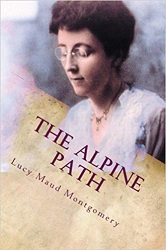 The Story of My Career

I’m visiting Prince Edward Island in a few weeks (Yay!), and as part of my preparation, I’m rereading L. M. Montgomery’s books in the order they were published, so this short book about how she got started writing was up next.

In the Preface, the purpose of the book is explained:

In 1917 the editor of Everywoman’s World, a magazine published in Toronto from 1911 until the 1920s, asked L. M. Montgomery to write the story of her career. What she produced was published in six instalments, June through November, under the title she chose, The Alpine Path. It came from a verse that had been her inspiration during the long years when success as a writer seemed remote and only dogged determination kept her on

The Alpine path, so hard, so steep,
That leads to heights sublime.

Now, I’ve read L. M. Montgomery’s Selected Journals and am currently reading her Complete Journals — so this little book doesn’t really contain any new information for me. Instead of focusing on just her writing career, Maud Montgomery writes a lot about her childhood. Though that part very much reflects how she came up with a child as imaginative as Anne and a child so in love with the natural beauty of Prince Edward Island – this is simply who she herself was.

She also finished up The Alpine Path by copying her journal entries from her honeymoon in Scotland. It’s not very pertinent to how she became a writer, and it feels like padding to make this long enough to be a book. Visiting Scotland is very interesting, yes, but doesn’t have a whole lot to do with the story of her career. This time through the book I enjoyed that section much more, since I got to visit Scotland in 2003 and have been to some of the same places.

Since I am now reading her books chronologically, I did notice in particular how much of this story of how she got started as a writer she later used in her book Emily Climbs, as her heroine Emily of New Moon works and struggles to become an author – just as Maud Montgomery did herself. In fact, some of these scenes are pulled exactly and used for Emily, emphasizing how autobiographical a character she is.

I was also reminded that Maud Montgomery did her apprenticeship writing short stories. Here she writes about how her first efforts were spurned. But she persisted and started getting published by magazines that paid her in copies. And she persisted still more until she actually got paid, and eventually made quite a sum with her pen, even before she published a book. So Anne of Green Gables didn’t come from nothing.

This book does remind me that L. M. Montgomery is in her element writing about characters in a small town and incidents and interactions that happen with them. She knows the foibles and quirks of human nature and can draw people to great effect with her pen.

It’s also interesting that her career had just begun when she wrote The Alpine Path. She had published the first three Anne books, Kilmeny of the Orchard, the two Story Girl books, a book of short stories, and a book of poems. She would go on to publish fifteen more books in her lifetime. So it’s no wonder that this book talks more about how she got her start than on what it was like to continue to build a career as an author. I do recommend reading her journals to find out more about that!

Find this review on Sonderbooks at: www.sonderbooks.com/Nonfiction/alpine_path.html