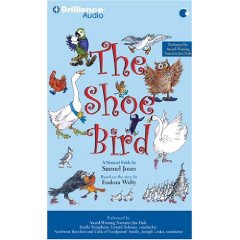 A Musical Fable by Samuel Jones

Based on the story by Eudora Welty

A children’s story set to narration and orchestration?  What a charming idea!  This CD makes for lovely listening.  Jim Dale’s incredible performance, with such astonishingly different voices for different birds, makes for a delightful listening experience.

I’m afraid this is no Peter and the Wolf.  The story, about a parrot who repeats the line, “Shoes are for the birds!” and gets all the birds of the world to believe it, seems much more lightweight than Peter’s story.  The music, while nice, didn’t seem as memorable to me.  But then, I only listened to it once, rather than the thousand times I must have heard Peter and the Wolf.

However, it does provide plenty of opportunity for the orchestra to give different themes to different birds (as well as Jim Dale’s different voices).  There’s even a cat who threatens the birds, all weighted down with their new shoes.

And isn’t it nice to think that here’s a symphony orchestra experience to which you could send children, and they would hear something new!  As for me, it made a delightful and diverting change from listening to more serious books on CD as I drove to work.  Instead, I got lovely music, a silly story, and Jim Dale’s vocal gymnastics.  I hope that composers and orchestras and vocal actors and writers will do more of this sort of thing!  (Hmmm.  It takes a large cast to pull it off.  No wonder Peter and the Wolf doesn’t have more wannabes.)