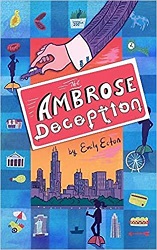 This book opens with three unlikely candidates from three different Chicago schools being offered a $10,000 scholarship opportunity. When Melissa Burris, Bondi Johnson, and Wilf Samson arrive at the office, they’re first made to sign a form saying they won’t discuss the clues with absolutely anyone. Then they’re given an envelope with three clues and told to take a picture of the clue solution. They are also given a cell phone, a camera, a debit card – and the use of a car and driver to take them anywhere in Chicago city limits.

Now, the kids are pretty sure something’s fishy. Given the title of the book, the reader is pretty sure, too. Wilf decides to enjoy the car and driver while he has them and plans a list of fun activities in Chicago. But Melissa and Bondi start seriously tackling their three clues.

So begins a clever and inventive puzzle novel. The clues all lead to locations in Chicago – and they are clues that require some thought. I now wish I’d tried to solve some using the internet – but I was reading the book in bed and didn’t bother. I imagine kids who live in Chicago might have an advantage, but this is still a legitimate puzzle that you feel like you as a reader can solve along with the characters.

I like the way they repeat the clues periodically – so you don’t have to keep turning back in the book.

I like that the characters are pretty ordinary kids, each with their own quirks. In fact, the drivers also have their own quirks. Wilf is a real slacker, trying to take advantage of this. Melissa is very suspicious, not wanting to even use the debit card or the car and driver. Bondi is a take-charge kind of kid, but he jumps to conclusions in a few spots.

I won’t say what the “deception” is in the title, but it’s all very satisfying when it works out. A puzzle novel with ordinary kids cast as the solvers, kids whom adults had written off.

Find this review on Sonderbooks at: www.sonderbooks.com/Childrens_Fiction/ambrose_deception.html