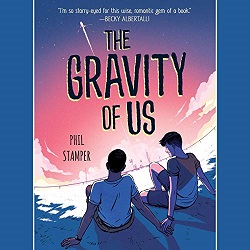 The Gravity of Us

Here’s a story of Cal, a teen who already had a large social media following on “Flash Fame” and plans to be a journalist, who has his whole life uprooted when his father is chosen to be an astronaut for NASA’s mission to Mars.

The whole mission has its own reality show, Star Watch, which is basically responsible for the fact that the project got funding in the first place. But Cal is uneasy about their lives going under a magnifying glass when they have to leave New York City for his father’s opportunity and go to Houston.

Cal knew all about the other astronaut families from Star Watch, so he already knew that Leo was incredibly handsome. But he didn’t know that Leo’s sister follows his Flash Fame posts and Leo thinks he’s cute. Their romance makes Cal begin to think Houston might not be so bad.

But as Calvin comes into conflict with Star Watch and their coverage turns more negative, can Calvin use his own following to turn things around?

This story was engaging and wonderful to listen to. I enjoyed that nobody batted an eye or made a big deal about the boys’ gay romance, and it was a nice romance with believable obstacles and misunderstandings along with the excitement and joy. On the audio, the Star Watch portions had a full cast, which did make it sound like you were listening in on a professional show.

I was a little drawn out of the story because they used dates in the present for the Star Watch broadcasts. They started out at the end of 2019, and progressed to hearing a date in August 2020. I wish they had set it about five years in the future, so it would be easier to believe it could really happen. Since obviously, NASA hasn’t put any of this in place yet, and what’s more, the book of course made no mention of any pandemic. So that was a glaring reminder that this is fiction.

But as fiction goes, this story gave me realistic and thoughtful romance, a believable family situation with – this was a surprise – parents who fight a lot at the beginning who grow together when the father gets his dream-come-true job, and even inspiring thoughts about the space program. Add in a teen protagonist figuring out what he wants out of life and working to save the day, and this all came out to a wonderful listening experience.

Find this review on Sonderbooks at: www.sonderbooks.com/Teens/gravity_of_us.html