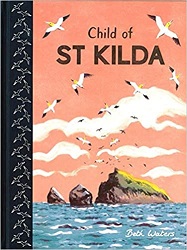 Here’s a lovely picture book for older elementary school readers. It tells about the remote island community of St. Kilda in northern Scotland. Conditions there were rugged and harsh, and the last settlers left the islands in 1930, after they had been inhabited for at least 4,000 years.

The story is told from the perspective of Norman John Gillies, who was born on the island of Hirta in St. Kilda in 1925. It tells what life was like on the islands as he knew it, and then how his life changed when the entire community moved away. Norman John was the last person alive who had lived on St. Kilda.

The book gives us painting of the wildlife and landscapes of the islands and tells about their rugged way of life. Some of the animals there aren’t found anywhere else in the world, because of how remote the islands are.

It tells about the community there and how they’d be cut off from the mainland for weeks at a time. They didn’t use money and paid rent in feathers, oil, and tweed. They worked together on various tasks for making food and clothing.

Here’s a story that came with a striking picture of the cliffs:

Between the months of March and November, collecting birds and eggs was the main activity.

The men climbed down the steep cliffs, using nothing but a simple handmade rope tied round their waist. They caught birds with a snare and also collected their eggs. Climbing barefoot gave a better grip, but it was still very dangerous work. It is said that the ankles of St Kildan men were much thicker than those of people from the mainland and their toes were much further apart.

The boys started climbing at about 10 years old, which must have been very scary! Norman John’s uncle, Finlay MacQueen, was the best climber of his day.

They would divide the catch among the whole community.

The book tells about school, church, and some interesting mail traditions.

But it was in the 1900s, when visitors began coming to the islands, that things began to change. As with other populations that met Europeans, the islanders didn’t have immunity to diseases that the visitors exposed them to, so many people died of illness. There was also the problem of young people deciding to move away where it wasn’t so hard to make a living. Some more disasters hit, and eventually, in 1930, when Norman John was five years old, the islanders were evacuated.

This book tells a story that’s fascinating and unusual. It does a good job of explaining why the people had to leave, while at the same time showing beautiful things about the rugged life on the islands. And it tells about Norman John’s years growing up on the mainland, happily remembering St Kilda.

Find this review on Sonderbooks at: www.sonderbooks.com/Childrens_Nonfiction/child_of_st_kilda.html