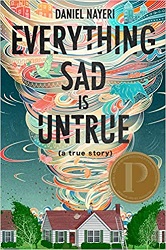 Everything Sad Is Untrue

I felt like I scored when this won the Printz Award. A friend had recently recommended it highly, so I had it checked out already, and didn’t have to wait to get it on hold. Even with that strong recommendation and winning the top award for Young Adult books, I was not disappointed when I read this book, and I agree with the acclaim.

The subtitle says this is a true story, but it’s presented as fiction. We learn at the back that the author told the story of his life as a refugee from his own perspective when he was twelve. Since he wasn’t able to verify facts, he went with his memories and changed some details – and called it fiction.

The style makes this book memorable and delightful. He writes it, telling the reader the story, as his younger self told stories to his class when he was twelve. To give you the idea, I’ll show you the beginning:

All Persians are liars and lying is a sin.

That’s what the kids in Mrs. Miller’s class think, but I’m the only Persian they’ve ever met, so I don’t know where they got that idea.

My mom says it’s true, but only because everyone has sinned and needs God to save them. My dad says it isn’t. Persians aren’t liars. They’re poets, which is worse.

In one version, maybe I’m not the refugee kid in the back of Mrs. Miller’s class. I’m a prince in disguise.

That’s how they all begin.

With a promise. If you listen, I’ll tell you a story. We can know and be known to each other, and then we’re not enemies anymore.

I’m not making this up. This is a rule that even genies follow.

In the 1,001 Nights, Scheherazade – the rememberer of all the world’s dreams – told stories every night to the king, so he would spare her life.

But in here, it’s just me, counting my own memories.

And you, reader, whoever you are. You’re the king.

I’m not sucking up, by the way. The king was evil and made a bloody massacre of a thousand lives before he got to Scheherazade.

It’s a responsibility to be the king.

You’ve got my whole life in your hands.

And I’m just warning you that if I’m going to be honest, I have to begin the story with my Baba Haji, even if the blood might shock you.

Of all the tales of marvel that I could tell you, none surpass in wonder and coolness the one I am about to tell.

That gives you an idea of the style, which continues the entire book. In a somewhat rambling but completely charming way, Khosrou, who was renamed Daniel so Americans could pronounce it, tells the story of his Persian forebears and life in Iran, how his mother became a Christian and they had to flee, and how things are completely different now in Oklahoma.

But that summary doesn’t convey the power and poignancy of this story.

His mother is portrayed as the hero of the book – utterly unstoppable. The stories inside the book range from tragic and frightening, including their time as refugees before they got permission to come to America, to more garden-variety encounters with unkind kids in Oklahoma, to mythic tales of Daniel’s ancestors. He was a small child when he had to leave his home country and extended family behind, and he conveys that child’s perspective.

He also weaves themes through the narrative so that I want to read it again to see what I didn’t catch the first time. I think next time, I’ll listen to an audiobook, because that will suit the style perfectly.

Find this review on Sonderbooks at: www.sonderbooks.com/Teens/everything_sad_is_untrue.html