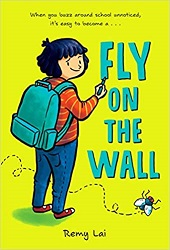 Fly on the Wall

Henry Khoo has figured out the perfect way to prove to his family that at twelve years old, he is not a baby. He has laid a plot to spend the first day of school break, not at his former friend Pheeb’s house as his family thinks, but on an airplane flying from Australia to Singapore where his Dad lives.

I thought of course this plan would fail spectacularly. But no, this book is the story of that flight. (And the book does convince me he could have pulled it off. It turns out that twelve is the age that kids are allowed to travel unaccompanied. Tickets were on sale, and he memorized his mother’s credit card number to get the ticket.)

Henry and his big sister Jie usually spent every school break at their Dad’s house anyway. But this year, Jie is going to be looking at universities, and Jie and Mom and Popo scoffed at Henry’s idea that he should go on his own. He will show them.

This book is liberally sprinkled with cartoon drawings, because Henry likes to draw, and this book shows us what he puts in his absolutely private notebook. We learn that Henry draws an anonymous internet comic that spreads gossip about kids at school, “Fly on the Wall.” But the principal is going to “appropriately deal with” the author of “Fly on the Wall” when he finds out who it is. Can Henry keep his secret? And he’s starting to have second thoughts about some of the things Fly on the Wall posted.

And then a classmate shows up on the very same flight — a classmate who knows Henry’s secret identity. Can Henry make it into Business Class to confront him?

The epic adventure of Henry Khoo is going to have some lessons along the way.

Find this review on Sonderbooks at: www.sonderbooks.com/Childrens_Fiction/fly_on_the_wall.html