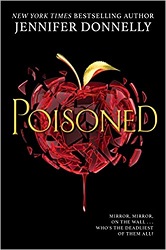 Like her earlier novel, Stepsister, in Poisoned, Jennifer Donnelly takes the basic skeleton from a fairy tale and goes far afield with it, ending up with a story that includes the main plot elements, but with very different applications.

Both stories begin with gore. In Stepsister, the stepsister cuts off her toes to try to fit her foot into the glass slipper. In Poisoned, a huntsman skillfully succeeds in cutting out Sophie’s heart and putting it into a box.

Fortunately, seven brothers living in the woods find her, and one of them is a skilled clockmaker. He makes her a clockwork heart. It happened on the morning of Sophie’s birthday, when she would have become queen. Everyone had told her that she was too soft-hearted to be a good ruler, but she had found a handsome prince to marry, who would be able to make the tough decisions.

It does turn out that Sophie’s stepmother, who ordered the killing, wasn’t entirely to blame. She was ordered to have Sophie’s heart put in the box by a sinister dark king, Corvus, the King of Crows, who comes to her in her magic mirror.

But clockwork doesn’t last forever. So after Sophie learns what the brothers did, she decides she will go find the prince she’d agreed to marry, the man who said he loved her, and ask him to use his army to attack the castle of the King of Crows. Never mind that he seems to have accepted the story of her death and doesn’t seem to be looking for her.

Both of Jennifer Donnelly’s fairy tale retellings also put a feminist spin on things. Yes, dear reader, it will turn out that Sophie can’t rely on a handsome prince to save her and must do so herself. In fact, it may turn out that her soft heart is exactly what she needs to defeat the dark king.

Another marvelously spun tale, making you look at a familiar story in a completely different way.

Find this review on Sonderbooks at: www.sonderbooks.com/Teens/poisoned.html