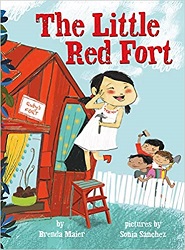 I recently read and loved the new picture book The Little Blue Bridge, which is loosely based on the story of the Three Billy Goats Gruff. So when I discovered the author and illustrator pair had an earlier picture book out about the same irrepressible little girl with three big brothers, I immediately put it on hold.

The Little Red Fort is a picture book based on “The Little Red Hen.” Instead of animals, we’ve got a feisty little girl called Ruby, who has three big brothers. Instead of making bread, she wants to make a fort.

Both books begin the same way: “Ruby’s mind was always full of ideas.”

In this book, Ruby found some old boards and asks her brothers for help to build something.

Oscar Lee pretended not to hear her.
Rodrigo gave her a look that could melt Popsicles.
José almost fell off the fence.
“You don’t know how to build anything,” they said.

Ruby draws plans and gathers supplies. I was a little alarmed when I saw her carting supplies and spotted a saw in the box. But even though Ruby’s brothers won’t help her cut the boards, we see in the picture that Ruby’s mother is the one doing the actual cutting, while Ruby looks on behind safety goggles. And when it comes to hammering the nails, although Ruby is undoubtedly very helpful and overseeing where to put the nails, we see her grandma holding the hammer.

Yes, like the little red hen, since Ruby built the fort, she decides to play in it by herself. But I like the happy ending, as the brothers win their way in with some improvements and additions, including painting the fort red.

There’s a note at the end that this book celebrates the hundredth anniversary of the first picture book version of The Little Red Hen.

Find this review on Sonderbooks at: www.sonderbooks.com/Picture_Books/little_red_fort.html