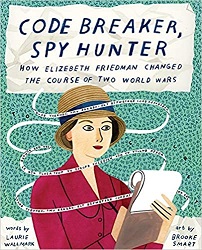 How Elizebeth Friedman Changed the Course of Two World Wars

This picture book biography features a female American code breaker, a woman I’d never heard of before – whose work was declassified in 2015, thirty-five years after her death.

Most of us have heard of Alan Turing, the British mathematician who broke the German’s Enigma code. I hadn’t realized that America was working separately on cracking the code and succeeded separately. And the person in charge of that effort was a woman, Elizebeth Friedman.

Her work as a code breaker began long before that. She was hired in 1916 to try to find secret messages hidden in Shakespeare’s plays by Francis Bacon, whom her employer thought was the real author of the plays. She didn’t succeed in finding any, but that got her started in decoding. She and her husband were involved in the United States government’s first code-breaking unit, the Riverbank Department of Ciphers, in 1917 during World War I. They wrote pamphlets about the techniques they developed which are considered the basis for the modern science of cryptology.

She didn’t only work during war time, although she served during both wars. She also used her methods to catch smugglers during Prohibition and later captured spies.

I’ve recently reviewed books about making and breaking codes and ciphers, so I love this one about a woman who made that her life’s work. The author includes fun details such as the dinner party that Elizebeth and her husband hosted in 1938 where the guests had to solve clues to figure out where each course was being served.

Because of the top secret nature of her work, Elizebeth wasn’t celebrated for her accomplishments in her lifetime. Here’s how this picture book biography ends:

Elizebeth was a true heroine of both World War I and World War II. She is now considered one of the most gifted and influential code breakers of all time. Yet no one knew how many codes she broke, how many Nazis she stopped, how many American lives she saved . . . until now.

There’s more information at the back of the book including hints about coded messages hidden in the illustrations. This is a perfect book for kids interested in codes.

Find this review on Sonderbooks at: www.sonderbooks.com/Childrens_Nonfiction/code_breaker_spy_hunter.html