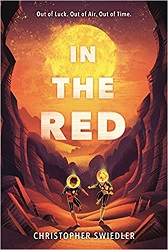 In the Red takes place on a Mars colony with a kid who grew up there. His parents took him out on the surface many times – but when he was ten and tried to pass his Basic Certification, he had a panic attack and failed. Ever since then, he can’t even get to the airlock.

Now Michael is twelve, and determined to prove himself. He’s sure his parents are disgusted by his “condition” and way too protective, so he schedules a test without telling them. When he gets put with the Advanced Test, he impressively calculates directions in his head without using the nav computer, but still has a panic attack when he’s almost gotten back to the dome. Will he never succeed?

Soon after, at night, his best friend Lilith shows him a secret way to get out of the dome. They steal a slightly damaged rover and go on a joyride. When everything is going well, Michael rashly decides to pay his father a visit, six hours away at the magnetic field station at the polar ice cap.

It would have worked, if the station didn’t suffer a major disaster that took down the magnetic field. Now all the humans on Mars need to take cover before the sun comes up with its deadly radiation and no protection from the magnetic field. Trouble is, where will Michael and Lilith find protection out on the surface?

That’s just the beginning of their troubles. Communication is also down, and no one knows they’re out on the surface. In the tradition of a good thriller, solving one problem is only a temporary respite before the next life-threatening situation comes up. The author has them working with reasonably imagined future technology that does have major constraints as they try to survive on a planet that could easily kill them.

This book reminded me of The Martian, but for kids. The dangerous situations and solutions all sounded plausible as well as terrifying. Michael’s practical genius with math had a counterweight in the devastating panic attacks that always put him at further risk.

A science fiction story that feels like it could be telling the future. Kid vs. Nature in a setting that is more hostile than anything on earth.

Find this review on Sonderbooks at: www.sonderbooks.com/Childrens_Fiction/in_the_red.html