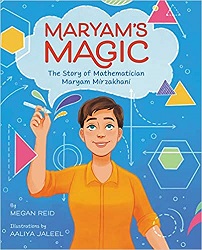 The Story of Mathematician Maryam Mirzakhani

Many years ago, having just graduated from college, I went to grad school in the field of mathematics at UCLA. Out of 120 people beginning math grad students there that year, only 5 of us were women. So in 2014, when Maryam Mirzakhani became the first woman (and the first Iranian) to win the Fields Medal — the top prize in mathematics — I was delighted.

And here’s a picture book biography of this groundbreaking woman! Another thing to be delighted about. Young children can learn that brilliant mathematicians can be female.

The book tells how Maryam thought she didn’t like math as a child, but wanted to be a writer and an artist. Then she discovered geometry — and the author of this picture book says she took a storytelling artists’ approach to doing math.

It’s always a challenge to represent the work of mathematicians in a picture book biography. I like the loopy artwork the illustrator chose, tying in with the author’s explanation of Maryam’s process:

When it was hard to solve a difficult equation, Maryam covered her house’s floor with big sheets of paper and knelt to trace them with loops and lines, just as she had when she was young.

By now, Maryam was married with a child of her own. She drew so much that sometimes her daughter, Anahita, would tell people proudly that her mommy was a painter.

One of Maryam’s theorems was called “the magic wand theorem.” Here’s the explanation of that theorem:

She explained it using the image of a pool table, with balls that zigged and zagged forever. If you covered the balls in paint, how long would it take for their scattered paths to color the table completely?

Maryam’s magic wand math helped people all over the world. Astronauts could plot safer courses for their rocket ships. Meteorologists could predict weather patterns with more speed and accuracy. Doctors could understand how dangerous diseases grew and spread.

Sadly, Maryam died of breast cancer three years after winning the Fields Medal. This book beautifully explains her lasting legacy in a way children can understand.

Find this review on Sonderbooks at: www.sonderbooks.com/Childrens_Nonfiction/maryams_magic.html