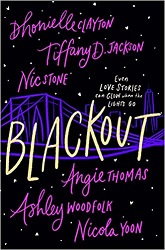 This is a lovely collection of six love stories written by six outstanding authors for young adults. All the stories are set on the day of a major blackout in New York City, and all the teens are Black. All the couples are also gravitating toward a block party supposed to happen in Brooklyn that night.

But given those constraints, we’ve got lots of variety. One story is presented in five acts as the couple attempts to walk across New York City from Harlem to Brooklyn to get home. They had recently broken up after years together, and now they’re stuck with each other again when the subways aren’t running. Another story has a boy helping another boy in the dark of the subway — and he’s only beginning to admit to himself that he’s attracted to that boy. One story takes place on a tour bus with a class from Jackson, Mississippi, exploring New York. There’s a love triangle on the bus. Another girl is helping out residents of a retirement home when she finally meets the girl her grandfather’s been telling her about. One girl wants to get to the party to confront her ex and get him to take her back. That plan is disrupted by the driver of the car she hired. Another couple have been friends for years and now they’re on a quest to settle a bet in the dark in New York Public Library after they were supposed to leave with everyone else.

All of the stories are charming, and all of them are fun to listen to. Tiffany D. Jackson’s story in five acts begins the collection, and then another act is presented in between the other stories. Each story happens a little bit later in that fateful evening as we hear about the couple walking across the city. And as that couple progresses through the city, they come near each other couple along the way. The listener gets a sense of walking through the city, but focusing in on side stories along the way.

Find this review on Sonderbooks at: www.sonderbooks.com/Teens/blackout.html