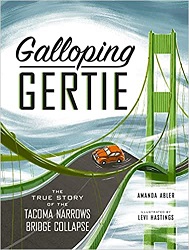 The True Story of the Tacoma Narrows Bridge Collapse

Galloping Gertie tells the story of the Tacoma Narrows Bridge that collapsed in 1940 only four months after it opened.

To keep the book from being too somber, it gives us the point of view of a boy named Dale Wirsing. He could see the bridge from his house and walked across it once with his parents. The windy day of the bridge’s collapse was Dale’s birthday. As a kid, he thought it was an incredibly exciting event to watch the bridge twist in the wind and eventually blow apart.

The book gives plenty more background, both in the text itself and in the back matter.

A local engineer, Clark Eldridge, had designed the bridge to be lightweight and flexible . . . perhaps a little too flexible.

When the wind blew, the center span bounced up and down. The men who built the bridge nicknamed her “Galloping Gertie.” People said they could see the cars ahead of them disappear and reappear as they drove across her. Others claimed it was like riding a roller coaster!

We are presented with the drama of the day of collapse, and how the few people on the bridge before it shut down did make it to safety (but alas! not the dog). The bridge designer, being local, had driven across the bridge early that morning and actually watched its destruction.

I knew about the bridge because of an exhibit on bridges at the St. Louis Science Center – where our family used to go frequently with my kids. It had a video running of the Tacoma Narrows Bridge collapse and claimed the reason was due to resonance — so I was interested in the discussion at the back that said experts now believe the collapse was due to aeroelastic flutter. I also enjoyed the terms to search for on YouTube and I again watched the bridge collapse.

This subject could be very grim, but this author and illustrator make it dramatic, compelling, and fascinating.

Find this review on Sonderbooks at: www.sonderbooks.com/Childrens_Nonfiction/galloping_gertie.html