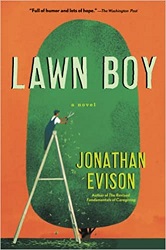 Okay, I’ll be honest — the only reason I read this book was to find out what all the fuss was about. After another library in our system included this title in a display of banned books, a resident protested, and Fox News picked it up — and people from all over the country called our library and complained. I particularly remember a man from Arizona yelling at me and telling me that I approve of pornography.

So let me tackle the objections head-on. My first reaction after actually reading the entire book is disgust — disgust at the book banners, not at the book.

First, let me point out this is a book for adults. It is published for adults and marketed for adults. However, it features a 24-year-old protagonist who’s figuring out how to make a living and move out of his mom’s house, so it may well be of interest to juniors and seniors in high school who are thinking about their future. It won an Alex Award, which is specifically for adult books that have appeal for teens. So it is appropriate for high schools to carry it. Not middle schools, but I doubt that’s even an issue.

And I have read so many adult books that are much, much more explicit in sexual content. The difference? Most of those other books involve heterosexual relationships, and I can’t help but think it’s the same-sex relationship that bothers the book banners.

But — get this — there is absolutely no “on-screen” sex in this book. I’ll give a little bit of a spoiler that the main character finds a wonderful and affirming relationship with another man and spends the night with him. But the book pretty much fades to black and he simply wakes up in the morning next to his partner. Absolutely no description of having sex.

And I don’t hear much about that. What the banners seem to object to is that the main character mentions some experimentation with another boy in fourth grade. The other kid’s idea, but it was a mutual activity, and not by any stretch of the imagination does it constitute “pedophilia,” as the caller from Arizona seemed to think. The narrator does talk about it using coarse language, and he’s a tiny bit more detailed when he talks about losing his virginity with a girl six years before the book opens, but it’s funny how the banners don’t mention that.

Yes, the book is full of profanity. It’s talking about working-class families where this is how they talk. It would feel very inauthentic if they talked like a suburban mom. Now, I personally prefer novels where characters do talk like me, a suburban mom, and don’t use profanity. But sometimes it’s good to read about lives I wouldn’t otherwise know anything about and build some empathy.

Let me, finally, talk about the story. It’s about a kid named Mike Muñoz who loves landscaping. He even has a talent for topiary. But he currently works for a company that watches his every move and makes him pick up dog droppings (not referred to so delicately), and he has enough, so he quits. But he’s already living with his mom, who works two jobs, and caring for his three-hundred-pound older brother with special needs. It’s not easy to find something new. And meanwhile, there’s a waitress he has his eye on, but how can he impress a girl without having any money?

The book follows his efforts and his stumbles. He encounters various people who seem like they’re going to help but then let him down. About halfway through the book, I told myself I was only finishing it because I wanted to know what I was defending. However, I was glad I did finish. As the book progresses, Mike does learn from his mistakes and his setbacks — even the ones that weren’t his fault. And he really grew on me.

I’ve already given away that there’s a same-sex romance — that happening is the first Mike realizes he’s gay. The portrayal of that relationship is beautifully done and it’s lovely to see Mike relating to someone who builds him up instead of exploiting him. Outside of that, Mike figures out who he is and what he wants — and yes, the book has a happy and deeply satisfying ending, and I’m so glad I didn’t stop in the middle.

I’ll admit this novel is not for everyone. In fact, it’s not the sort of book I typically recommend. But I ended up very happy I’d expanded my horizons by reading this book and gaining empathy for someone whose life is quite different from mine.

So I do recommend putting this book on hold at your local library. Chances are good you won’t find it on the shelves because with all the attention it’s been getting, the Holds list is long.

Find this review on Sonderbooks at www.sonderbooks.com/Fiction/lawn_boy.html