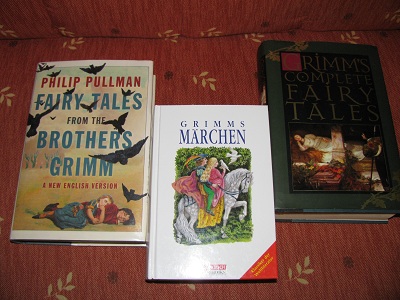 It’s time for Sonderling Sunday, that time of the week when I play with language by looking at the German translation of children’s books, or, in this case, English translations of German fairy tales.

I once again have checked out Philip Pullman’s new English version of Fairy Tales from the Brother’s Grimm to compare with my old version and my cheap German edition. I’m currently rereading Shannon Hale’s classic novel The Goose Girl, reading along with her summer book club on her blog. I came into it late, so I read a few chapters today to catch up, and thought I’d look at the original fairy tale today for Sonderling Sunday.

The German tale is called Die Gänsemagd, “the Goose maid.”

Some interesting phrases: (If both English versions agree, I’ll just list one. If Pullman is different, I’ll list his translation second.)
heranwuchs = “grew up”

unter freiem Himmel Schwören = “swear by the clear sky above her,” “swear under the open heavens”

bis ich mich geflochten und geschnatzt
und wieder aufgesatzt
= “Until I have braided all my hair
and bound it up again,”
“Until I’ve done my hair.”
(literally: “until I have with myself braided and stitched and again bound up.”

ihr Schicksal Wort für Wort literally: “her fate word for word.” Neither translator uses this phrase, but just says, “was listening to what she said, and heard it,” and “he heard everything she said.”

And after the gruesome punishment, the happy ending:

=”When the sentence had been carried out, the young King married his true bride, and both of them reigned over their kingdom in peace and happiness.”

= “And when the sentence had been carried out, the king’s son married his true bride, and they reigned over their kingdom in peace and happiness”

The peace and happiness seems to have no dispute, but I like Shannon Hale’s version better!

How about you? Can you think of practical ways to use these handy-dandy German phrases?