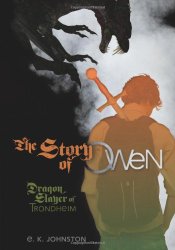 The Story of Owen

It’s easy to explain what this book is about: Modern-day Canada with dragons and dragon slayers!

The carrying out of that idea is much more intricate than you might think. There are insights about politics, publicity, environment, ethics, calling, and community. And, of course, plenty of danger and drama.

Before the Thorskards came to Trondheim, we didn’t have a permanent dragon slayer. When a dragon attacked, you had to petition town hall (assuming it wasn’t on fire), and they would send to Toronto (assuming the phone lines weren’t on fire), and Queen’s Park would send out one of the government dragon slayers (assuming nothing in Toronto was on fire). By the time the dragon slayer arrived, anything not already lit on fire in the original attack would be, and whether the dragon was eventually slayed or not, we’d be stuck with reconstruction. Again.

Needless to say, when it was announced that Lottie Thorskard was moving to town permanently, it was like freaking Mardi Gras.

Lottie Thorskard is a famous dragon slayer who was recently seriously injured in the line of duty, so let out of her corporate contract. But with her to Trondheim comes her brother Aodhan, another dragon slayer, and his son Owen, who is being trained in the family business.

Siobhan meets Owen when they are both late to class on his first day at the high school. She is the one telling the story. She is a musician, and the Thorskards ask her to become Owen’s bard, to tell his story for the public. In this alternate world where dragons exist, bards were once very important for dragon slayers, but now the practice is more rare.

I don’t need to tell too much more about the story. Dragons in modern-day Canada. Siobhan posts her songs about Owen on YouTube. I will say that E. K. Johnston does a magnificent job of world-building, showing us why and how dragons make the world totally different.

When I first read the book, I was a little annoyed that there was no romance between Owen and Siobhan. After reading the second book, Prairie Fire I’m actually happy about that. Because between the two books, I’m not sure I’ve ever read such a good portrayal of a close and sustaining male-female friendship. I’ll say more in my review of Prairie Fire.

Also, with no romance, there are no sexy situations in this book. Just intriguing situations that get you thinking about the ethical and political implications while enjoying a good yarn.

Now, there is an interesting addition, which I liked: When Siobhan is first invited to the Thorskards’ house, she’s excited to meet the most famous married couple in Canada — Lottie Thorskard and her wife, Hannah. That relationship, both called “Aunt” by Owen, is portrayed as a loving and warm one, and Hannah especially, not a dragon slayer, but a smith, takes Siobhan under her wing when dragons come to town.

My love for this book only got bigger when I read the sequel. I’ll be coming back to these two books. The Story of Owen, as told by Siobhan, sticks with you.

Find this review on Sonderbooks at: www.sonderbooks.com/Teens/story_of_owen.html

Source: This review is based on my own copy, given to me at ALA Midwinter Meeting by the publisher.