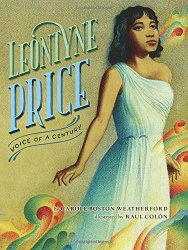 Voice of a Century

Several years ago, I read When Marian Sang, by Pam Munoz Ryan, and The Voice that Challenged a Nation, by Russell Freedman, and so felt I knew about how Marian Anderson showed that the beauty of a voice does not depend on skin color.

Leontyne Price: Voice of a Century tells a later chapter in the story, about a girl inspired by Marian Anderson. This picture book biography imaginatively conveys the beauty of her voice with swirling colors of art.

The text tells a simple story of a girl who dared to dream.

1927. Laurel, Mississippi.
The line between black and white
was as wide as the Mississippi River was long.
All a black girl from the Cotton Belt could expect
was a heap of hard work – as a maid, mill worker, or sharecropper.
Her song, most surely the blues….

Wasn’t long before Leontyne was finding her voice.
Singing along to her daddy James’s records and listening
to the Metropolitan Opera’s Saturday-afternoon radio broadcasts.
She soaked up the sopranos, if not the foreign words.
Art songs and arias, shaping a brown girl’s dreams.

The text tells about Leontyne playing the piano, singing in the choir, and being inspired by the voice of Marian Anderson. The accompanying illustrations show the swirling beauty of song.

Leontyne went to college in Ohio to study to be a teacher, but after the college president heard her sing, she went on to study voice instead and went on to Juilliard.

The illustrations of Leontyne’s international career in opera, and as the first black opera singer to perform on television in America, are particularly lovely.

Leontyne was never more majestic than as Aida,
playing the part she was born to sing. As the Ethiopian princess,
with her skin as her costume, she expressed her whole self.
Standing on Marian’s shoulders, Leontyne gave the crowd goose bumps.
The song of her soul soared on the breath of her ancestors.

The book finishes up with the line:

Her song sure wasn’t the blues.

An Author’s Note at the end fills in details for adults.

This is a lovely and inspiring story for anyone to read – about a person with a beautiful voice who transcended the obstacles in her path.

Find this review on Sonderbooks at: www.sonderbooks.com/Childrens_Nonfiction/leontyne_price.html