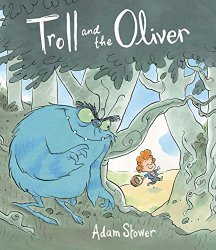 Troll and the Oliver

Here’s some high drama for the preschool set. We start out being introduced to Troll and “an Oliver.” Troll keeps trying to catch the Oliver, wanting to eat it for lunch. But the Oliver keeps getting away. We see many of these scenarios, as the Oliver dodges, hides, and sneaks away, cleverly eluding capture. As he escapes he sings little songs and always wears a happy smile. Despite the giant fuzzy blue troll, the reader isn’t really frightened for Oliver.

Then one day, the reader thinks Troll has given up. Oliver looks and looks for Troll and steps stealthily just in case.

And shall I give a spoiler? I don’t feel like I can explain how absolutely brilliant this book is without explaining what happens.

But perhaps I can get away with saying there’s a half-page turn in this book – which is the most dramatic page turn I have ever seen in a children’s book. Read well, I can easily imagine children jumping out of their skin.

When I say half-page: A double page spread has vertically half a page in the middle of it. Before you turn the half-page, you’ve got Oliver in the kitchen, just having realized the Troll has given up.

My name’s Oliver,
Look at me!
I’m as clever
As can be!
I’m the best
And I’m the winner.
I’ll never ever
Be that smelly
Troll’s dinner!

Turning the half-page “opens” the cabinet – to devastating effect.

Let’s just say that it’s a good thing it turns out Olivers taste awful. And the pictures of Troll tasting him all have Oliver’s legs hanging out of Troll’s mouth. So still not too frightening.

And then, in a brilliant stroke, Troll smells what the Oliver was baking in the kitchen. All along, something was wafting from the oven, but our attention wasn’t called to it. Turns out – Trolls love CAKE!

And the book finishes off with a happy scene of Oliver having a Cake Picnic with a whole big party of trolls. The back endpapers have a recipe for Troll Cupcakes.

I especially like the Author’s Note at the end:

I would strongly advise the reader to ALWAYS have some cake handy, just in case a troll should happen by. He might be hungry. . . .

One of the things I love about this book is that Oliver is consistently smiling. Despite the dramatic reversal in the middle, the reader is never too worried for Oliver, because he’s not worried. Yep, there’s a big fuzzy blue troll trying to eat a little kid, but it’s not really a frightening book. And you come away with the message: Always have some cake handy.

What could be better?

I’m going to try this book at Storytime. . . And see if I can make the kids jump.

Find this review on Sonderbooks at: www.sonderbooks.com/Picture_Books/troll_and_the_oliver.html