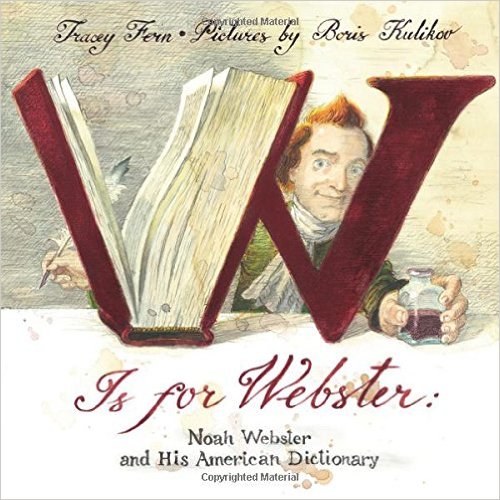 W Is for Webster

Noah Webster and His American Dictionary

Here’s a picture book biography of Noah Webster, telling simply about his obsession with words and creation of the first American dictionary.

Creating the dictionary was a patriotic act for Noah.

By now, the Revolutionary War was winding down. It was clear that America would win its independence. Noah was a proud patriot who longed to do something that would help to hold his new, complicated nation together. Being a bit of a know-it-all, Noah thought he knew just what America needed: its own language – one different from the English spoken in Britain.

“A national language is a national tie,” Noah insisted to all who would listen, and to many who wouldn’t.

Webster first wrote a speller, then a small dictionary. He spent decades working on his big dictionary, including origins of words and quotations using them.

This book shows us how deep this desire went as he had to figure out how to support his family while always working on the dictionary. He eventually went to Europe to get the research done that he needed on word origins.

As it happens, years ago I was given a facsimile edition of that first dictionary. This book prompted me to pull it out and look inside. Sure enough! It contains word origin information, and multiple definitions with examples of usage – many of those examples taken from the Bible.

By now, America had changed. Andrew Jackson was president, and he was both a common man and a bad speller. The nation was finally ready for Noah’s dictionary, full of common words simply spelled.

States issued congratulatory proclamations. Newspapers called him “America’s own Dr. Webster.” Congress adopted Noah’s dictionary as its standard reference book. And although Noah’s dictionary has been revised many times, it is still the standard in America today.

Find this review on Sonderbooks at: www.sonderbooks.com/Childrens_Nonfiction/w_is_for_webster.html