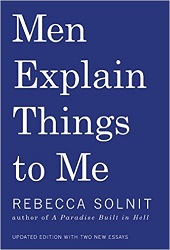 Men Explain Things to Me

I’m afraid most intelligent women need to hear nothing more than the title of this book to give a knowing smile. Rebecca Solnit starts the essay with a particularly stunning example of a man who knew nothing about a topic Rebecca had written a book about, trying to explain things to her. He even mentioned an “important book” she should have read, which it turned out he had not actually read but had read about in the New York Times Book Review. This was the book she had written.

I like incidents of that sort, when forces that are usually so sneaky and hard to point out slither out of the grass and are as obvious as, say, an anaconda that’s eaten a cow or an elephant turd on the carpet.

Yes, people of both genders pop up at events and hold forth on irrelevant things and conspiracy theories, but the out-and-out confrontational confidence of the totally ignorant is, in my experience, gendered. Men explain things to me, and other women, whether or not they know what they’re talking about. Some men.

Every woman knows what I’m talking about. It’s the presumption that makes it hard, at times, for any woman in any field; that keeps women from speaking up and from being heard when they dare; that crushes young women into silence by indicating, the way harassment on the street does, that this is not their world. It trains us in self-doubt and self-limitation just as it exercises men’s unsupported overconfidence.

Now, she does make clear that she’s not talking about all men, nor even the majority of men. But there are men out there who don’t respect women’s knowledge or opinions and feel they automatically have more important things to say. My first Master’s degree was in mathematics, and I always felt like I had to prove myself. And always, I must admit, took great delight in getting higher scores than my male classmates on math tests – which was more about me than about them. But where did I get the idea I had to prove myself?

The rest of the essays in this book talk about other ways women are silenced and marginalized. There’s also some discussion about marriage equality in that context.

The phrase [“marriage equality”] is ordinarily employed to mean that same-sex couples will have the rights different-sexed couples do. But it could also mean that marriage is between equals. That’s not what traditional marriage was. Throughout much of its history in the West, the laws defining marriage made the husband essentially an owner and the wife a possession. Or the man a boss and the woman a servant or slave.

Another essay is about a powerful international figure who raped a hotel maid in his luxury suite – and how that can be a metaphor for many things.

The opening essay begins with what is really a humorous scene. But this is not a humorous book. Overall, it’s about feminism and how we’ve made progress, but there is still progress that needs to be made.

Rebecca Solnit will make you think and consider and speak.

Find this review on Sonderbooks at: www.sonderbooks.com/Nonfiction/men_explain_things_to_me.html