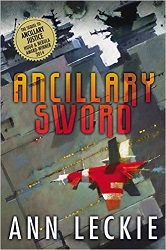 Ancillary Sword is the sequel to the astonishing Ancillary Justice. Breq, the former AI controlling a ship and multiple ancillaries, now in one isolated body, is now the captain of a ship, Mercy of Kalr, and holds a rank of Fleet Captain. Because Breq still has implants to connect her consciousness with her original ship, she can instantly receive information from Mercy of Kalr, though not as effectively as when she had more bodies.

In this volume, the events in Ancillary Justice have touched off a possible civil war between different bodies of the Lord of the Radchaai (more fun with consciousness and perception). Breq has gone to a distant planetary system, hoping to help the sister of a former captain she loved who was killed around the time Breq’s ship was destroyed.

The gates ships use to travel between planetary systems are down, so Breq is seemingly isolated once she arrives. But a military ship, Sword of Atagaris, accosts them as soon as they enter the system. Something strange is going on.

Breq goes onto the space station and sets up quarters where she is not welcome. There are political undercurrents to navigate and plots and counterplots.

This book was always interesting and absorbing, but the plot path wasn’t as clear to me throughout as I would have liked. The conflicts Breq faces are mostly local, and it’s not entirely clear how it fits in with the civil war she may have touched off.

I have a strong feeling I will like this second book better after I’ve read the third book (and this is the advantage to reading a trilogy after it’s already complete), which I’m going to do as soon as possible. Then I think I’ll understand better how it all fits together.

As a side note, there’s an interesting scene when they come to the planet and there’s a Genetalia Festival going on and garlands of brightly colored penises on the wall. Breq is told, “The Athoeki weren’t very civilized…. They mostly aren’t even now. They make a division between people with penises and people without.” Imagine that.

Again there are mysteries for Breq to solve and motivations to uncover. And we get to enjoy world-building done by a genius. I’m very curious what’s going to happen next.

Find this review on Sonderbooks at: www.sonderbooks.com/Fiction/ancillary_sword.html