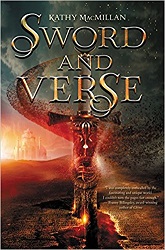 Only the Qilarite nobles are allowed to learn to read, and only the royal family learn the Higher Order symbols, which they use to write to the gods. No one in Qilara knows that Raisa has a piece of writing given to her by her father, one of the Learned Ones of Arnath, where they believed that all should be given knowledge. Before their village was raided and he was killed, her father gave her her heart verse, written out on a soft piece of paper. Raisa hopes that when she’s taught to read, she will be able to understand what that valuable piece of paper says.

But as Raisa is studying with Prince Mati, learning the word-based writing system of Qilara, the prince begins seeking quiet moments with her, and she can’t resist.

But he is a prince and she is a slave. He needs to marry for political gain.

Raisa does remember enough to know the Arnath writing system is sound-based, so it’s going to take some work to decipher it. And if anyone finds out she’s saving any writing from one day to the next, she knows she would be executed.

All these threads are woven together in such a way that not only Raisa’s romance, but the whole kingdom lies in the balance. Prince Mati is to be the next king, and he talks about putting an end to slavery, but there are powerful forces in the Council who won’t let that happen. Meanwhile, Raisa’s being contacted by members of the Rebellion who want to put an end to it their way.

It all leads to Raisa being embroiled in dramatic political upheaval and even needing to request help from the gods.

This book is absorbing and well-written, and was a lovely way to start my reading retreat. I did enjoy that it was a stand-alone fantasy novel rather than a trilogy – but I’m afraid it did feel like it all wrapped up too neatly.

The author did have the enslaved people from Arnath be the fair-skinned blondes and the ruling Qilarites be dark-skinned with curly hair. It would have been nice to be a little more subtle there, but at least it was a reversal of American history.

I was recently faulting a different book because in it, the protagonist taught herself to read a sound-based writing system, which isn’t actually possible. In this book, Raisa does have verbal cues to start with, and she is taught the word-based writing system, so it was more plausible. I did like that the author made clear it took her a lot of work to figure out the Arnath sound-based system, but she was rather vague about how that could actually be done.

But those are quibbles. I enjoyed reading this book, and was personally glad Raisa got a happy ending, even if the skeptical side of me thought it was a little too neat. If you’re looking for a cautionary tale about not trusting a powerful young man who wants to have sex with you, don’t look here. But if you’re looking for a fun story about daring to learn and daring to shake up the status quo and trusting your heart – this book is absorbing reading and will leave you smiling.

Find this review on Sonderbooks at: www.sonderbooks.com/Teens/sword_and_verse.html