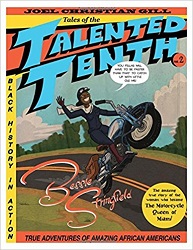 Tales of the Talented Tenth, Volume 2

The amazing true story of the woman who became The Motorcycle Queen of Miami!

I think that nonfiction in graphic novel form (okay, necessarily fictionalized a bit) is one of the best things that could happen to education. Joel Christian Gill has started a series about remarkable African Americans, telling their amazing stories in comic book form.

I’d never heard of Bessie Stringfield, but she was the sole woman in the U. S. Army’s civilian motorcycle courier unit during World War II, and the first black woman inducted into the American Motorcycle Hall of Fame and the Harley Davidson Hall of Fame.

The book begins with her childhood. After her family moved to America from Jamaica, her mother died and her father just abandoned her in their hotel room. The book tells about her unusual upbringing after that and how she grew a passion for motorcycles and traveling.

She traveled across the United States eight times, and ended up doing lots of traveling in the Jim Crow South. (I like the way the author pictures bigoted people in this series as giant crows. It’s disturbing, as it should be.) She had run-ins with people who wanted to harm her, but was always able to outrun them on her motorcycle.

The story of her varied exploits is a quick but very entertaining read. And you’ll learn about someone who deserves to be remembered, the Motorcycle Queen of Miami, Bessie Stringfield.

Find this review on Sonderbooks at: www.sonderbooks.com/Childrens_Nonfiction/bessie_stringfield.html