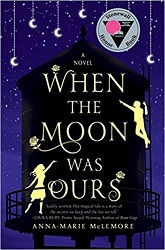 When the Moon Was Ours

Samir and Miel live in a small town and they are best friends. Sam’s family is from Pakistan. He paints moon lamps and hangs them all over town. He’s a gentle person, and when Miel fell out of the old water tower and seemingly materialized out of water, Sam was the one who calmed her down. He and his mother found a home for Miel with Aracely, who lived next door.

Hinting at her mysterious origins, the hem of Miel’s skirt is always wet. Even more mysterious, though, is that she grows roses out of her wrist. After one blooms and falls away, another grows. The color of each depends on what Miel has been thinking about.

As you can probably tell, this book is full of magical realism, which isn’t really my thing. I like fantasy with rules of magic that make sense, that seem understandable. This has several wild things going on, which I wasn’t crazy about, although I did enjoy reading the beautiful prose.

Here’s a section toward the beginning:

They’d touched each other every day since they were small. She’d put her palm to his forehead when she thought he had a fever. He’d set tiny gold star stickers on her skin on summer days, and at night had peeled them off, leaving pale constellations on her sun-darkened body.

She’d seen the brown of her hand against the brown of his when they were children, and holding hands meant nothing more than that she liked how warm his palm was in the night air, or that he wanted to pull her to see something she had missed. A meteor shower or a vine of double-flower morning glories, so blue they looked dyed.

All these things reminded her of his moons, and his moons reminded her of all these things. He’d hung a string of them between her house and his, some as small as her cupped palms, others big enough to fill her arms. They brightened the earth and wild grass. They were tucked into trees, each giving off a ring of light just wide enough to meet the next, so she never walked in the dark. One held a trace of the same gold as those foil star stickers. Another echoed the blue of those morning glories Sam could find even in the dark. Another was the pure, soft white of the frost flowers he showed her on winter mornings, curls of ice that looked like tulips and peonies.

The main problem of the book arises when the four Bonner sisters decide they want Miel’s roses, that those roses belong to them. Miel had been offering them to her mother by drowning them in the river. But now Ivy Bonner tells Miel that if she doesn’t give them her roses, they will tell the whole town that Sam’s name is really Samira.

Miel knows that Sam has a girl’s body, but she also knows that he is a boy, and his body doesn’t matter. In fact, the book opens with the first time they sleep together.

The Author’s Note at the back explains why Anna-Marie McLemore can write this so well. She met her own husband and fell in love with him when they were teens – but before he had admitted to himself that he was transgender. Combined with the questions she had about her own life, it sounds like this book came from a deep place in her heart, her own questions and struggles growing up beautifully expressed in magical realism.

This book is about secrets and truth and power. But it’s also a love story about two teens discovering who they really are.

Find this review on Sonderbooks at: www.sonderbooks.com/Teens/when_the_moon_was_ours.html